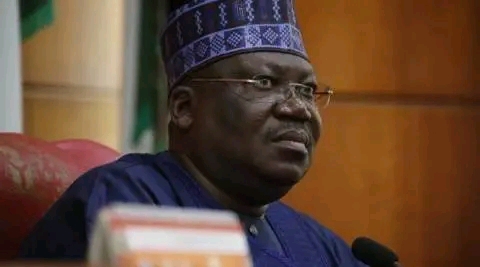 Embattled Nigerian Senate President, Ahmad Lawan, and some other legislative candidates of the All Progressives Congress are in big trouble as the ruling party failed to meet the deadline to upload their names on the portal of the Independent National Electoral Commission.

Hotmedia.ng gathered on Monday evening that the APC could not upload its National Assembly candidates on the portal before Friday, June 17 deadline. As a result, it is now relying on using the “back door” to pressurise the electoral body to extend the deadline.

Senate President Ahmad Lawan
Our correspondent was further told that APC leaders would meet with INEC officials on Tuesday to “secretly resolve” the ruling party’s inability to upload the names before the deadline.

“The APC could not upload its NASS candidates before the deadline. They are trying to use the back door to do it. INEC must not give them an extension.

“They are trying to meet with INEC tomorrow (Tuesday) to see how they can resolve it quietly,” a top source revealed.

Hotmedia.ng learnt that the inability of the ruling party to meet the deadline was a sequel to the controversies surrounding the party’s plot to manipulate and replace the names of some of the candidates who won the National Assembly primaries with the names of favoured individuals, some of whom did not even participate in the primaries.

Chief among those in the centre of such controversies is the Senate President, Lawan, who is hell-bent on making the list despite not participating in the Senatorial primary election in his state – Yobe State.

The media on Saturday reported that the APC Yobe North Senatorial District candidate in the 2023 general elections, Bashir Sheriff Machina, said he would go to court to seek legal redress if the party failed to remove the name of the Senate President, Lawan, which was penned down to be submitted to INEC.

The ruling APC had submitted Lawan as its candidate to INEC despite his (Lawan) non-participation in the senatorial primary – an action Machina on Friday described as illegal and inhuman.

Addressing a press conference last Friday, Machina, who was declared the winner of the primary election conducted for Yobe North, had said he remained the candidate of the APC in the senatorial district.

Machina had said, “I remain the candidate of the APC Yobe North senatorial zone as duly elected. I did not withdraw for anybody and I will not withdraw because as a matter of fact, it is a mandate given to me by members of our great party, the delegates. So surreptitiously removing my name, I consider (it) as very undemocratic, illegal and of course inhuman.

“I will take measures by first appealing to my party that if this action was truly done, it should be corrected, possibly if it was erroneously done. And it was deliberately done, we are actually seeking redress from the National Working Committee of our party under the leadership of Senator Abdullahi Adamu. I remain the candidate.

“I remain the candidate and it remains so. I hope our leadership will take the necessary measures. We will work hard to exploit and explore all the necessary channels as provided by our guidelines. In the event of the contrary, as Nigerian citizens and as law-abiding citizens, the constitution of our country being the overall law above every aspect of our lives as Nigerians, I would have no choice but to resort to court (legal) action.”

The media earlier reported that Machina raised the alarm that his life was in danger because he refused to step down for Lawan in his pursuit of a senatorial mandate.

This was disclosed by Machina’s campaign organisation in a statement obtained on Friday.

According to the campaign organisation, some hoodlums are after the life of Machina.

The statement had read, “Information at the disposal of Bashir Machina Campaign Organisation is that there is a security threat to the senatorial candidate of APC for Yobe North, Hon. Bashir Sheriff Machina, especially in relation to his refusal to relinquish his legally acquired ticket.

“Credible sources confirmed that some people want him arrested or at worst eliminated. They have resorted to employing diabolical means over unlawful means, in pressurising him to step down.

“As Campaign Organisation, we warned that the people behind his ordeal in the last four days should be held responsible if any mishap happens to him. By this notice, we are putting everybody on red alert.”

The media had reported that Lawan was on the verge of suffering two losses within a week after the winner of the Yobe North APC senatorial primary, Machina, refused to step down for him.

Lawan had instead of contesting for the Yobe North Senatorial ticket challenged for the presidential ticket of the party but lost to a former Lagos governor, Bola Tinubu.