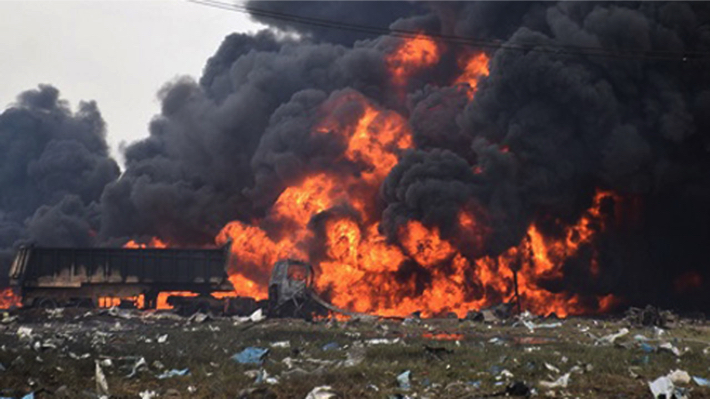 An explosion in Kabba, Kogi State, has thrown residents into confusion.

The incident was said to have occurred opposite Mannajot Petrol Station on Sunday evening, with a yet-to-be-ascertained number of people feared injured.

ISWAP had in April claimed responsibility for an attack on a police station in Adavi Local Government Area of the state.

The latest development comes a few days after about three persons were confirmed dead and many others injured in an explosion that occurred in Kabba.

The media had reported how military intelligence showed that ISWAP is moving towards the Southern part of Nigeria.

The Police Authorities did not confirm casualties or the type of explosives that ripped through the predominantly Yoruba community.

The police in Kogi on Sunday confirmed another yet to be ascertained explosion in Kabba in Kabbah-Bunu Local Government Area.

“As it is now, there is no casualty, but only chairs and tables and the building is affected by the yet to be determined nature of explosion.

“Already the Commissioner of Police, Mr Edward Egbuka, has directed our DC Investigations and the Bomb detective Squad to move to the scene to ascertain the very nature of the explosion.

“The police is on top of the situation as our officers and men drafted to the area have cordoned the place until investigation reveals the real cause of the explosion.

“It’s very unfortunate that criminal elements are out to disrupt the prevailing peace we are enjoying in Kogi.

“We shall not rest until we bring to book such elements and let them see the need for maintenance of peace in our society,” he warned.

Mr Ovye-Aya called on the people of Okepadi and Kabba to be calm and go about their normal duties without any fear as the police were on top of the situation.

The reports had it that the first explosion which generated controversies as to whether it was a bomb or gas cylinder, occurred on May 11 at a beer parlour around Lewu Junction in Kabba Town.