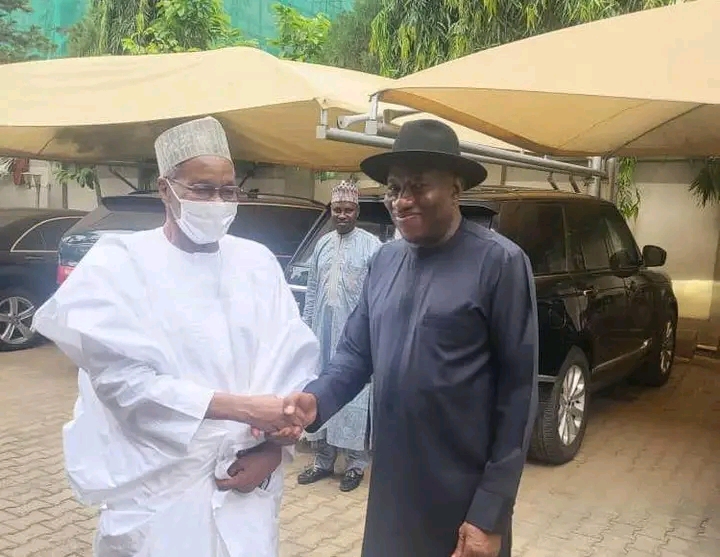 The Aso Rock cabals and All Progressives Congress power brokers in the Muhammadu Buhari government have reached out to presidential aspirants contesting on the platform of the ruling party to step down and support former President Goodluck Jonathan as the consensus candidate,  it revealed that  cabals, comprising some members of Buhari’s extended family and associates, are led by the president’s nephew, Mamman Daura.

They are said to have the ears of the president, as well as influence policy-making and select those who get major appointments.

Hotmedia.ng had recently reported how Jonathan met with Daura and other cabal members in Abuja where he was promised the automatic ticket of the APC.

The consensus method will entail President Buhari anointing him, while other aspirants will step down as it was done during the March 26 national convention of the APC, which produced Senator Abdullahi Adamu as the chairman of the party.

Multiple sources revealed on Saturday that all other aspirants had been notified not to expect any primary election next week.

The party had on Friday postponed its special convention for presidential primary for the 2023 general elections from May 29 to June 6.

The aspirants were also informed that Jonathan had been adopted by the President.
The move has caused division among party leaders, governors and other stakeholders who felt the former President did not deserve the ticket.

“There is internal war in our party, APC as all aspirants got notification that Goodluck Jonathan is Buhari cabal’s adopted candidate, imagine the insult,” a source told our correspondent.

“All the aspirants have been notified not to expect party primary next week Friday as the cabal around Buhari have chosen Jonathan as the consensus candidate of the party.”

Some of the aspirants include Bola Tinubu, a former governor of Lagos; Vice President Yemi Osinbajo and Rotimi Amaechi, a former Minister of Transportation.

Jonathan was Nigeria’s vice-president between 2007 and 2010 and became the president in May 2010 following the death of President Umaru Musa Yar’Adua. He later completed the latter’s tenure.

Jonathan won the 2011 presidential election but lost his attempt to secure a second term in office in 2015.

Hotmedia.ng had in the past reported how the Aso Rock cabal was pressurising the former President to defect to the APC.

He was said to have surprised the Northern elite and the cabal by his disposition to the Buhari presidency despite all the dirt and campaign of calumny thrown at him and the PDP before the 2015 presidential election, which gave Buhari an unprecedented victory over an incumbent.

It was learnt that some cabal members had also been impressed that despite the Buhari government’s glaring failure, Jonathan had not openly criticised his predecessor or his administration, much unlike ex-President Olusegun Obasanjo.

For instance, former President Olusegun Obasanjo had written open letters condemning the Buhari government and also verbally berated it at any opportunity.

Our correspondent learnt from sources that the establishment of ‘Almajiri’ schools by Jonathan to reduce a large number of out-of-school children in the North also scored the former president good points in the eyes of the northern cabal in the APC, especially with most of it now rotting away, even under a Northerner as president.

Jonathan had recently rejected the presidential form of the ruling APC purchased for him, purportedly by a group of supporters from the northern region.

Speaking through his Media Adviser, Ikechukwu Eze, the former president said it was an insult for the group to have bought him the forms without his permission.

However, sources had told SaharaReporters that claims by the former President that he did not authorise the purchase of the multi-million-naira forms are far from the truth.

“Contrary to his denials, former President Goodluck Jonathan gave over N200 million to the governor of Jigawa, Mohammed Badaru, to purchase the APC nomination and expression of interest forms for him,” a source privy to the arrangement had told our correspondent.