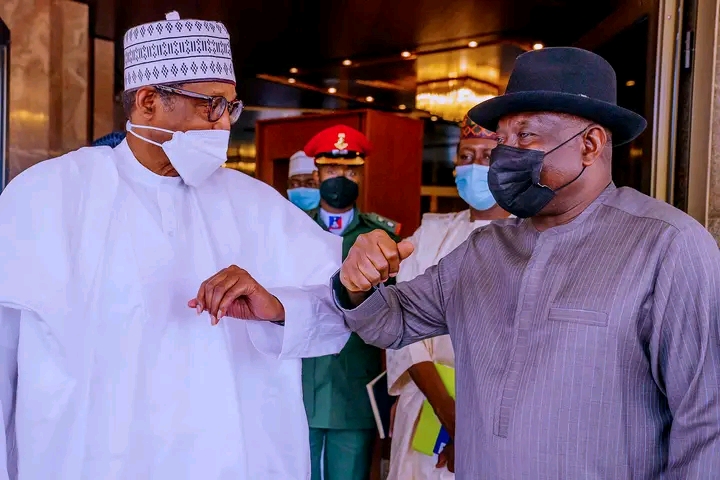 President Muhammadu Buhari will be travelling to Spain by next week as part of a grand plot to “give space” to power brokers in the All Progressives Congress to perfect the emergence of former President, Goodluck Jonathan, as the party’s 2023 consensus candidate, our correspondent has gathered.

Competent sources informed our correspondent on Saturday that part of the reasons why Buhari went to Malabo, the Equatorial Guinean capital with his wife, Aisha, was to prevent her from causing “confusion” while the cabals were at work.

Hotmedia.ng had months ago broken the story of how a cabal in the ruling APC are pushing for Jonathan to succeed Buhari, after “being impressed” by how the former President never openly criticised Buhari government despite its ineptitude and despite the insults the APC, as an opposition party, hurled at him (Jonathan) ahead of the 2015 presidential election.

The fact that Jonathan cannot spend more than one term in office, if they can manage to get him there, is also not lost on the cabal.

SaharaReporters had also reported earlier today that other key presidential aspirants of the APC had been told to adopt Jonathan as the party’s consensus candidate and not to expect any spectacular presidential primary by the next weekend, June 6, slated for the exercise.

Notable among the aspirants are; Bola Tinubu, a former governor of Lagos, Vice President, Yemi Osinbajo, and Rotimi Amaechi, who was the Minister of Transportation.

Speaking with SaharaReporters on Saturday, authoritative sources revealed that as part of the grand plan, Buhari will be away in Spain in the coming week to allow the cabals perfect Jonathan’s emergence as the party’s candidate.

One of them said, “What the other presidential aspirants thought was a rumour has now become real as the party leadership has been suspended, pending the return of President Buhari from Malabo later tonight.

“Also, Buhari took his wife to Malabo with him to prevent her from causing confusion in this whole plot while he’s away. The President is planning another trip to Spain next week so as to be out of reach while the Jonathan deal is perfected by the cabals led by his nephew, Mamman Daura.”

Hotmedia.ng had also earlier today reported that proxies working for the APC cabals would on Monday serve a Federal High Court order clearing Jonathan to the Independent National Electoral Commission and the APC in abuja.

The media had on Friday reported that the court sitting in Yenegoa, Bayelsa State, declared that Jonathan was eligible and “constitutionally” qualified to contest for president in 2023.

In his judgment on Friday, Justice Hamma Adama Dashen said Jonathan was not affected by the fourth alteration to the constitution barring Vice-Presidents who succeed their principals from serving more than one full term.

In 2018, President Muhammadu Buhari signed the fourth alteration of the 1999 Constitution which bars Vice-Presidents who succeed their principals from serving more than one full term.

Jonathan was Nigeria’s vice-president between 2007 and 2010. He became the president in May 2010 following the death of President Umaru Musa Yar’Adua and completed the latter’s tenure.

The case with suit no FHC/YNG/CS/86/2022 has Andy Solomon and Idibiye Abraham as plaintiffs while All Progressives Congress, Jonathan and the Independent National Electoral Commission were listed as defendants.

The Hotmedia.ng had gathered that the judgment was part of the plans of the Aso Rock cabal supporting Jonathan to take over from Buhari