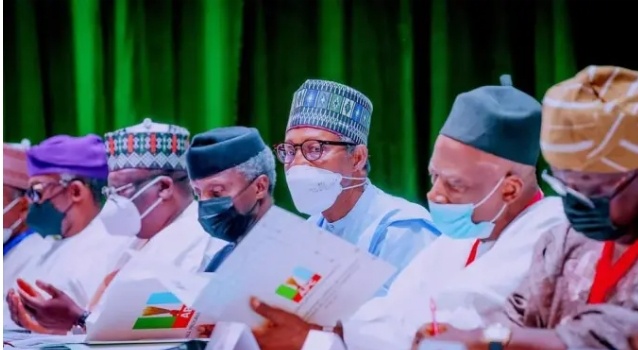 The push for a northerner to pick the presidential ticket of the All Progressives Congress (APC) has intensified ahead of the ruling party’s primary election slated for May 30 – June 1.

However, the development has created apprehension in the camps of the national leader of the party, Asiwaju Bola Ahmed Tinubu; the Vice President, Yemi Osinbajo; a former Rivers State Governor, Rotimi Amaechi and other presidential aspirants of the party from the southern part of the country.

Majority of the presidential aspirants of the APC are from the southern part of the country, believing that since President Muhammadu Buhari, who is completing his second tenure on May 29, 2023, hails from the North, the South would produce his successor.

EmailShaThe push for a northerner to pick the presidential ticket of the All Progressives Congress (APC) has intensified ahead of the ruling party’s primary election slated for May 30 – JHowever, the development has created apprehension in the camps of the national leader of the party, Asiwaju Bola Ahmed Tinubu; the Vice President, Yemi Osinbajo; a former Rivers State Governor, Rotimi Amaechi and other presidential aspirants of the party from the southern part of the Majority of the presidential aspirants of the APC are from the southern part of the country, believing that since President Muhammadu Buhari, who is completing his second tenure on May 29, 2023, hails from the North, the South would produce his successor.

Unlike in the People’s Democratic Party (PDP), zoning is not in the constitution of the ruling APC.

That notwithstanding, chieftains of the party from the southern part of the country are capitalising on the gentleman agreement, which those promoting the retention of the presidency in the North have described as non-existent.

It was gathered that arrangements have gone far for the party’s flag bearer to emerge from the northern part of the country.

Inside the game plan

Multiple sources told Daily Trust that the agenda is being promoted by some northern elders, governors, members of the National Working Committee (NWC) of the party and lawmakers.

Four of the 28 presidential aspirants including the Senate President, Ahmad Lawan; Kogi State Governor, Yahaya Bello; Jigawa State Governor, Mohammed Badaru Abubakar and a former Zamfara State Governor, Sen. Ahmed Yarima, are from the northern part of the country. The push, it was gathered made the four of them to pick the forms.

Findings by the paper revealed that the quest to retain power in the North started shortly after the re-election of President Buhari in 2019.

The proponents of the agenda, it was further gathered, are all out to secure the buy-in of President Muhammadu Buhari to actualise their plan.

It was further gathered that they have already reached out to people around the president, including his nephew, Malam Mamman Daura and the former Secretary to the Government of the Federation, Babagana Kingibe.

Recall that Daura had in July 2020, while featuring in a BBC Hausa Service interview, said that there was no need for zoning the presidential ticket to any part of the country.

His statement generated heated debate in the polity with many construing it to be the position of the president, a claim that was punctured by the presidency.

One of the promoters of the project, an elder statesman said parties exist to win elections and not to massage the ego of anybody.

He said with the feelers in the PDP that a strong contender from the North is likely to pick the ticket of the leading opposition party, the only option for the APC is to pick a northerner.

“It is our general calculation that we must also pick our candidate from the North because if we pick a southerner, the PDP will defeat us before noon on election day.

“This is why we have four aspirants from the three geopolitical zones in the North; Lawan (North East), Yahaya Bello (North Central), and Badaru and Yarima from (North West),” he said.

He, however, said they would mount pressure on Badaru and Yarima to pull out of the race, saying “We had Yar’adua and Buhari from their zone.”

Also, some governors who are members of the party from the North and South have been recruited into the project.

It was learnt that a meeting of the promoters and some southern governors pushing for the actualisation of the plan has been convened.

Recall the media reported that it was Governor Mai Mala Buni of Yobe State and his Imo counterpart, Hope Uzodimma, who returned the expression of interest and nomination forms of Senate President Lawan to the national secretariat of the ruling party.

Also, a former governor of Abia State who is now the Senate Chief Whip, Orji Uzor Kalu has been in the forefront of promoting northern candidacy. He has since shelved his presidential ambition in favour of Lawan.

Another source told Daily Trust that the promoters were behind the calls for the selection of the party’s candidate through consensus.

“We cannot go for direct primaries because of the number of the aspirants. Our best bet is consensus,” he said.

He said they would involve the president to prevail on all other aspirants to key into the arrangement in the interest of the party.

But Hotmedia.ng could not establish if President Buhari would agree and wade into the matter.

According to him, all the aspirants would be carried along if the party is re-elected.

“Coercion would not be used but persuasion and negotiation. Already, we have started reaching out to them,” he said.

Reacting, one of the leaders of the Tinubu’s campaign team said those promoting the northern presidency in APC were prisoners of power.

The politician, who does not want to be named, said the retention of power in the North under APC will lead to an implosion in the ruling party.

“Politicians who want to capsize the ship of the Nigerian project are the ones promoting the power retention agenda. They are prisoners of power. This is why Lawan and Badaru went and picked the forms.

“They urged Zulum and El-Rufai to pick the forms also but they said no. Any attempt to disenfranchise the South in APC will lead to an implosion in the party and its end. The South will pull out and if they do, APC will change to Northern Peoples Party (NPP),” he said.

We’ll lose election if South is schemed out – Sen Ndume

Also countering the promoters of promoting power in the North, Senator Ali Ndume (APC, Borno South), said the ruling party will be defeated if the South is schemed out of the APC ticket.

In a phone interview, Ndume, who leads the campaign of the former Minister of Transportation, Rotimi Amaechi, said it was not an excuse for APC to pick its candidate from the North because of the plans by PDP to field Atiku.

“It is not an excuse for us to pick our candidate in the North because they said PDP is planning to pick from the region. In APC, it’s the turn of the South and we need to all support them to actualise this.

“If we do justice, God will be with us. At the age of 63, God has done everything for me and I will stand by justice, even if I’m the only one. They supported us and this is our turn to support them. This is justice,” he said.

Reacting, Professor Kamilu Sani Fage, a renowned political scientist, said it was not surprising that the major parties were eyeing each other ahead of choosing their presidential candidates.

He, however, said if the APC ended up picking its presidential candidate from the North, it will eventually create a political problem for the country in the sense that in the future, it will be difficult to create the kind of alliance like the one that brought it to power because of the seed of distrust that this decision would have sown.

On whether the decision has the potential of leading to the disintegration of the country, Fage said it will not because even though Nigerian politicians have their ways of creating problems because of personal ambitions, they always make sure not to overheat the polity to the point that it will lead to disintegration because they tend to benefit more from a united Nigeria.