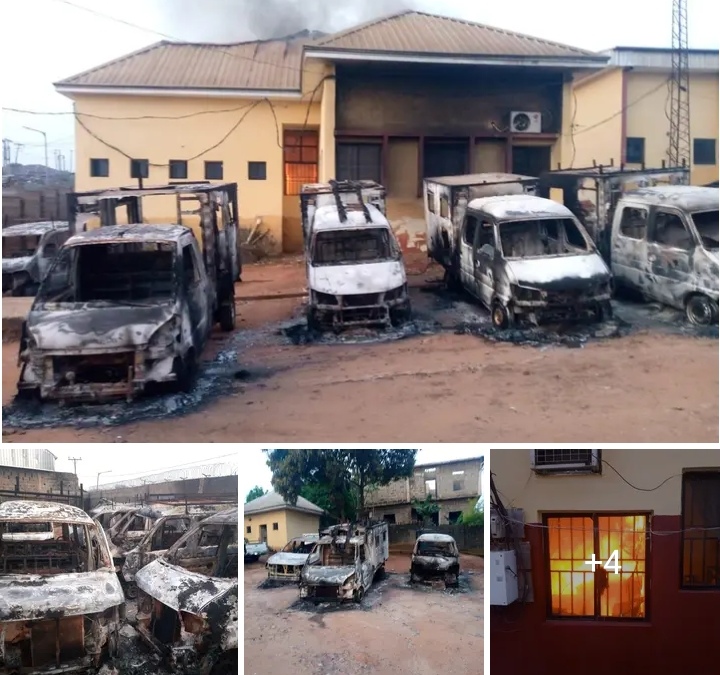 The hoodlums burnt down all the operational vehicles of the distribution power company in what was gathered as an early morning raid on the station.

Head, Corporate Communications, EEDC, Mr. Emeka Ezeh, who confirmed the arson, said the incident occurred in the early hours of Monday, May 16, 2022, at about 1.45 am by unidentified criminal elements.

According to Ezeh, about 32 utility and operational vehicles, along with other assets and equipment within the premises were burnt by the assailants.

Ezeh lamented that efforts made to reach the Anambra State Fire Service at the time to quickly put out the fire did not yield any positive result.

He said members of staff did what they could to salvage the situation as they watched the office building and other assets go down in flames.

He said, “It later took the intervention of the Honourable Commissioner for Utilities, Anambra State, Engr. Julius Chukwuemeka, at about 9.05 am this morning to bring the Fire Service team down to the scene of the incident.”

“The management of EEDC expressed shock over the ugly incident, saying it happened at a time when the company had invested so much to improve its operations and transform the socio-economic landscape of the area.

“This is a big loss to EEDC and a great setback to the efforts being made by the company to strengthen its network and improve the quality of service to its customers within Ogidi and Anambra State at large.

“We have already brought this development to the attention of the relevant authorities and it is expected that proper investigation will be carried out and the perpetrators of this dastardly act brought to book.

“There is no way a developing economy as ours can progress if we continue to record this kind of incident.

It was gathered that after gaining access into the office complex by pulling down part of the wall, the criminals attacked one of the security personnel manning the office and inflicted several machete cuts on his head, leg and arm.

They also demanded his gun, while his other colleagues ran for their lives, it was also learnt.

The victim is currently receiving treatment at an undisclosed hospital.

“We thank God that no life was lost, we condemn this unjustifiable act and pray such does not reoccur,” Ezeh said.

Some gunmen in a midnight raid set ablaze the Idemili North Local Government Secretariat and a Magistrates’ court in the council in Anambra State.

Hotmedia.ng gathered that the arsonists had entered the premises on Sunday night to carry out the attack.

A staff member of the council told SaharaReporters that the hoodlums burnt all files in the secretariat, including the building.

A video and pictures of the incident which have gone viral on social media show that the entire buildings have been reduced to rubble.

Vehicles parked inside the local government secretariat were also burnt.

The State Police Public Relations Officer, DSP Tochukwu Ikenga, who confirmed the incident said it was done by unidentified arsonists.

Ikenga said, “Yes, the incident was confirmed, and our men were there to restore normalcy.

“Right now, the fire has been put off, and calm has been restored to the area.”

The policeman was said to be intercepted on a motorcycle by the assailants who shot and killed him.

The incident occurred around 6:10 pm on Sunday.

Aguata, the local government area of Governor Chukwuma Soludo has come under serious attacks by unknown gunmen since the government declared war on them.