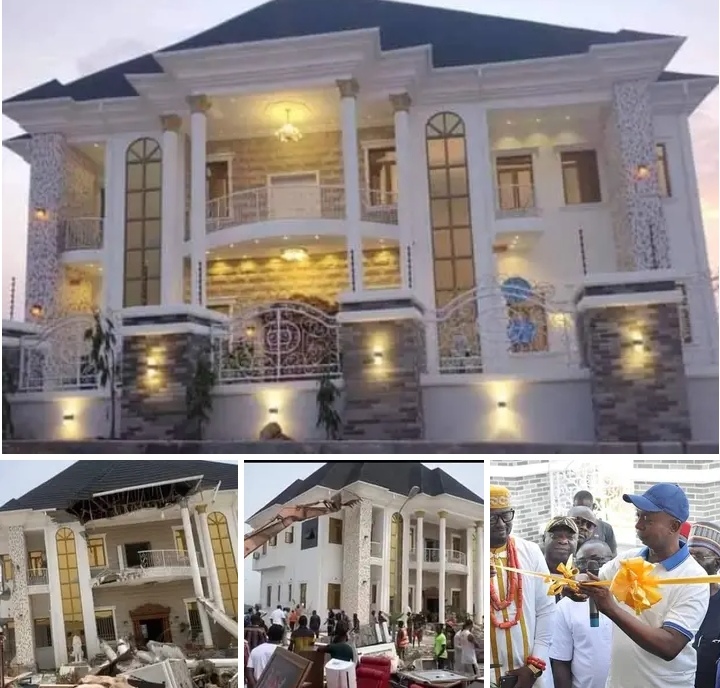 Hotmedia.ng gathered that the mansion, which is in the Asokoro area, was invaded on Saturday at about 8am by officials of the FCT Administration with a bulldozer which began to demolish the building.

Speaking with our correspondent , the owner of the building, Kpokpogri and ex-lover of Dikeh, expressed shock saying he was not pre-informed by the officials about the demolition which he described as illegal.

“I don’t have any issue with anybody that will warrant the wicked and illegal destruction of my house this morning without any pre-notice from the FCT ministry. Is it because I am from the Niger Delta region of the country? I just woke up this morning and saw the ministry officials, security men and a bulldozer and the next thing I saw was my fence being brought down.

“They entered my compound and began to demolish my house; as we talk, my swimming pool is gone, a bungalow in my compound is also down. And any moment from now, the full mansion, which cost me over N800million, my hard-earned money, will soon be brought down and I don’t know the offence I have committed and I don’t know who is behind this.

“None of the officials want to speak with me and I am only being told now that the FCT minister, Muhammad Bello, sent them to come and demolish my house that a road will be passing through my house.

My house was approved, I paid for everything, I am not owing the federal government a dime. Before now, about five northerners had approached me to sell my house to them but I refused. Because, my house is seated on a rock and an attraction of everybody; so everybody wants to have my house.”

Prince Joseph Kpokpogri has been having a serious battle with his estranged lover, Dikeh, resulting to series of arrest, legal actions and counter-arrest and actions.

According to Kpokpogri, After getting approvals from the Federal Capital Development Authority, that he spent a whopping N800million to erect his Abuja mansion, which was commissioned by Ned Nwoko!

FCT Minister, Mohammed Musa Bello, ordered the demolition of the mansion, leaving behind other buildings around.

Kpokpogri claimed that the decision to pull down his mansion was an act of oppression.

He alleged that it was demolished because he refused to sell it to some ”powerful ” but unnamed individuals who had begged him to sell the property to them.

According to a report From News Agency of Nigeria (NAN), officials of FHA, alongside its Managing Director, Gbenga Ashafa, visited the site of the doomed building three days ago, in the company of some top management team of FCTA.

The officials claimed that the plot of land originally belonged to FHA, but a proper building plan was not approved before the mansion was erected.

According to FHA, notices to stop work were served at different stages and times of the work, but Kpokpogri refused to comply.

Also, the Executive Secretary of the Federal Capital Development Authority (FCDA), Malam Shehu Hadi, who was also in the team that visited the site, said the road alignment had been done long ago and FHA was duly notified.

Hadi noted that the alignment, which the demolished building obstructed, was designed to serve as an important bye-pass to the Abuja-Keffi axis.

He added that any plan to realign the road because of the building would be difficult and not a fair judgment to those that it would affect, considering that the demolished building was not in existence earlier when the plan started.

Speaking on the development, the Director, FCTA Department of Development Control, Muktar Galadima, said the mansion, was unapproved, and couldn’t be allowed to override public interest.

He said the building was an obstruction to a major road network, connecting the popular Apo Bridge to many parts of the city.