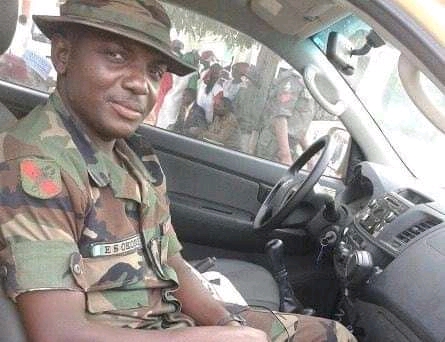 Hotmedia.ng has obtained the picture of an army commanding officer, Lieutenant Colonel Ememike S. Okore (N/11717) who was declared missing following an ambush by gunmen suspected to be terrorists in Taraba State.

Army spokesperson, Onyema Nwachukwu in a statement on Wednesday said troops of the 93 Battalion had launched an operation to rescue the abducted senior officer.

“Troops are currently in pursuit of the bandits and will leave no stone unturned in the ongoing search and rescue operations for the missing personnel,” he said.

“The good people of Taraba state are enjoined to be vigilant and report any suspicious movement to security agencies.”

Meanwhile, SaharaReporters learnt that Okore was illegally dismissed by the army authorities in 2015 but was reinstated by the National Industrial Court in 2018.

He was among senior officers accused of failing to perform their military duties during the fight against Boko Haram which resulted in the militants’ capture of Baga, the centre of a multinational force in Borno State.

The missing officer, then a Major in the army was tried by a special court-martial for cowardice.