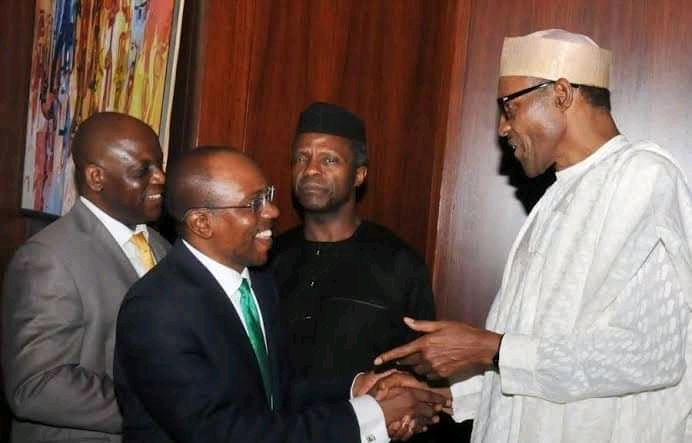 President Muhammadu Buhari has ordered all heads of agencies, departments, parastatals, and ambassadors with political ambitions to resign.

This comes after the President on Wednesday directed ministers with political ambitions to also resign.

A circular obtained by Hotmedia.ng on Thursday morning shows that the office of the Governor of the Central Bank of Nigeria, Godwin Emefiele, among other agencies was copied.

The circular was signed by the Secretary to the Government of the Federation, Boss Mustapha.

The circular with reference number SGF/OP/ I/S.3/XII/ 173 was titled, ‘Ministers, heads of government agencies, ambassadors and other appointees with political ambitions to resign’.

It reads, “Mr President has observed and noted the expression of interest and intention by some members of the Federal Executive Council, Heads of Extra-Ministerial Departments, Agencies, Parastatals of Government, Ambassadors and other political office holders to contest the Presidential, Gubernatorial, National and State Assemblies’ elections.

“Consequently, Mr President has directed that the affected office holders aspiring to run for various offices in the 2023 general elections should tender their resignation on our before the 16th of May, 2022.”

It stressed that for the avoidance of doubt, the directive affects “all ministers, Heads and Members of Extra-Ministerial Departments, Agencies, Parastatals of Government, Ambassadors as well as political appointees who desire to contest for elective offices”.

Following reports that Emefiele is also eyeing the Presidency in 2023, which Hotmedia.ng had broken months ago, many Nigerians have called for his resignation or sacking, saying it is unethical for the Central Bank Governor to be pursuing a political ambition while remaining in office as the head of the apex bank.

Hotmedia.ng on Wednesday reported that President Buhari asked all members of the Federal Executive Council (FEC) contesting elective positions in 2023 to resign.

They were asked to submit their letters of resignation on or before Monday the 16th of May, 2022.

According to the Minister of Information and Culture, Lai Mohammed, the order excludes the Vice President, Professor Yemi Osinbajo because he is an elected member of the cabinet.

Mohammed added that if the need arose, the directive might involve political appointees.

Among those affected are Ministers of Transportation, Chibuike Rotimi Amaechi; State for Education, Chukwuemeka Nwajiuba; Labour and Productivity, Chris Nigige; Niger Delta Affairs, Godswill Akpabio; Science and Technology, Ogbonnaya Onu and State for Petroleum Resources, Timipre Sylva who have all joined the presidential race on the platform of the All Progressives Congress (APC).

Others are Attorney General of the Federation, Mallam Abubakar Malami, who has declared interest in the governorship position in his home state of Kebbi.

Running for the governorship position in Abia State is the Minister of State Mines and Steel, Uche Ogar while the Minister of Women Affairs, Pauline Tallen has also declared her ambition to contest for the senatorial seat in Plateau State.

Now President Muhammadu Buhari has ordered the resignation of Godwin Emefiele, governor of the Central bank of Nigeria (CBN), and other political appointees seeking to contest the 2023 elections.

CBN, Governor, Emefiele had been under pressure since some groups purchased the 2023 Presidential forms of the ruling All Progressives Congress for him.

Governor Rotimi Akeredolu of Ondo State had asked the president to fire him if he failed to step down,

The opposition Peoples Democratic Party (PDP) also demanded his arrest over his interest in the 2023 elections.