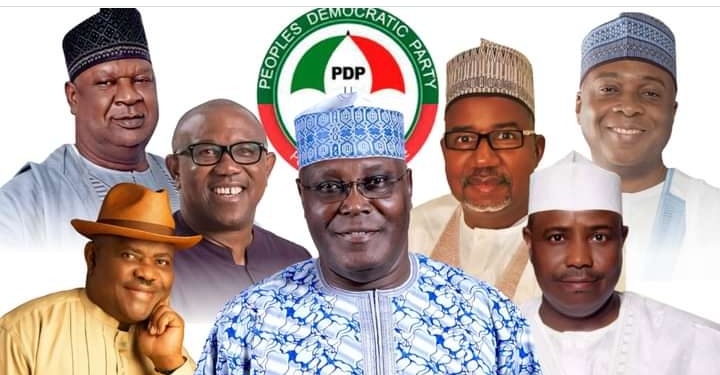 Ahead of the presidential primary of the Peoples Democratic Party (PDP) slated for May 28 and 29, the pendulum is swinging towards five of the 17 aspirants that are eyeing the party’s ticket.
This is just as the party’s National Executive Committee (NEC) would meet tomorrow where decisions would be taken on zoning, mode of primary, among others.The report of the party’s zoning committee, chaired by the Benue State Governor, Samuel Ortom, would be discussed during the meeting.

Hotmedia.ng had earlier reported that the committee had jettisoned zoning and recommended that the race for the presidential ticket be opened to all aspirants.

Of the 17 aspirants that picked the N41m forms, the screening committee, led by a former Senate President, David Mark, screened out two.

A reports have that a total of 3,700 delegates would determine who flies the ticket.

With the collapse of the consensus arrangement initiated by Saraki, Tambuwal, Bala Mohammed and Hayatu-Deen, party leaders said the presidential flag bearer of the leading opposition would emerge through indirect primary

An elder statesman, Professor Ango Abdullahi, had named Saraki and Bala Mohammed as the consensus candidates. The endorsement raised dust in the party, thus it collapsed.

Investigative reports shows that the chances of Atiku, Saraki, Obi, Wike and Tambuwal seem to be brighter than the other aspirants.

Hotmedia.ng gathered that the leadership of the party is likely to mobilise for one of them.

He is seen by many leaders of the party, including the Board of Trustees (BoT), National Executive Committee (NEC) and even the National Working Committee (NWC) as the aspirant with the requisite war chest and connections to win in the general election for the party. He was the flag bearer of the party in the last election.

Saraki was one of the main agitators of the consensus arrangement. Even though the planned consensus did not work out, his nomination, alongside Bala Muhammed, is seen as a boost by his supporters.

He is also seen by many party stakeholders as a bridge between the young and the old to pacify the young generation, especially if the ruling APC decides to present an older candidate.

Some members of the NWC are also said to be working for the actualisation of the Saraki candidature – as someone from the North Central if the zoning arrangement does not work out.

The presidential aspirants from the South East have promised to work together to ensure that one of them clinches the ticket of the party.

They have also insisted that it is the turn of the zone to not only produce the candidate of the PDP, but also the president of the country. There are reports that he would be presented as the consensus candidate of the South East.

The former Speaker of the House of Representatives is all out to actulaise his ambition. He is one of the promoters of consensus, but the nomination of Saraki and Bala Mohammed by Professor Ango Abdullahi negatively affected him. He rejected the outcome.

Also seen as a strong contender for the party’s ticket is Rivers State Governor, Nyesom Wike, he has a large war chest and also has some Southern governors backing him, and who are sure to sway delegates in their states in his favour.

Wike, believed to be one of the main financiers of the party, told members of the NWC that he worked for their emergence as leaders of the party and that it was time to pay him back.

I have plans B and C – Bauchi gov

Meanwhile, Bala Mohammed has said he has other plans reserved if the presidential ticket does not favour him in the primary.

Mohammed stated this when he addressed party delegates in Minna, the Niger State capital, on Monday.

He explained that zoning was not a problem but a formula that would lead to dissolution of power between the federating units to ensure equity and justice.

He said, “I am a general in politics, and nothing is wrong for me having plans B and C. I always have plans, not only for myself, but for my followers, campaign directors and others as well.”

He further said that zoning in the party’s constitution was deliberate to ensure peace, equity and justice, hence that it must be respected by members who believed in the supremacy of the party.

He emphasised that the party’s decision was supreme which must be obeyed, noting that he would abide by the leadership’s discretion, but that he was presenting himself before the party elders, members and Nigerians for them to take their decision on who would lead them.