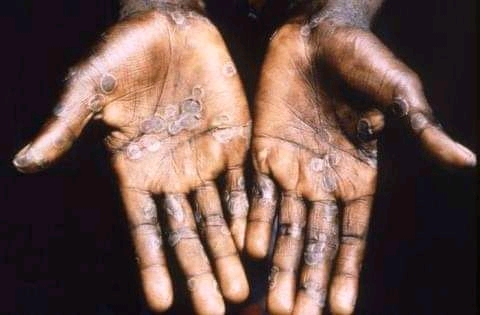 United Kingdom confirms another deadly disease Monkeypox In Traveller From Nigeria. A person in England has been diagnosed with monkeypox, the UK Health Security Agency (UKHSA) has said.

The patient had recently travelled from Nigeria, which is where they are believed to have contracted the infection, before travelling to the UK, the UKHSA said.

Monkeypox is a rare viral infection which kills up to one in 10 of those infected but does not spread easily among people.

It is the seventh ever case of monkeypox in the UK and is the only case recorded since two patients were identified in North Wales in 2021.

The disease was first detected in the UK in 2018 after another traveller brought the virus back from Nigeria and it spread to two other people, including one NHS nurse who caught it from bed linen.

The person who has contracted Monkeypox is receiving care at the expert infectious disease unit at the Guy’s and St Thomas’ NHS Foundation Trust, London (pictured)

It is usually a mild self-limiting illness and most people recover within a few weeks but severe illness can occur in some individuals.

The infection can be spread when someone is in close contact with an infected person; however, there is a very low risk of transmission to the general population.

A Government spokesperson said that, as a precautionary measure, UKHSA experts are working closely with NHS colleagues and will be contacting people who might have been in close contact with the individual to provide information and health advice.

Dr Colin Brown, Director of Clinical and Emerging Infections, UKHSA, said: ‘It is important to emphasise that monkeypox does not spread easily between people and the overall risk to the general public is very low.

‘We are working with NHS England and NHS Improvement (NHSEI) to contact the individuals who have had close contact with the case prior to confirmation of their infection, to assess them as necessary and provide advice.

‘UKHSA and the NHS have well established and robust infection control procedures for dealing with cases of imported infectious disease and these will be strictly followed.’

‘This is a good example of the way that the High Consequence Infectious Diseases national network and UKHSA work closely together in responding swiftly and effectively to these sporadic cases.’

A rash can develop, often beginning on the face, then spreading to other parts of the body.

The rash changes and goes through different stages before finally forming a scab, which later falls off.

The first case of monkeypox in a human being was recorded in 1970 in the Democratic Republic of the Congo and has since been detected in a number of central and western African countries.

Most cases are reported in the DRC and Nigeria.