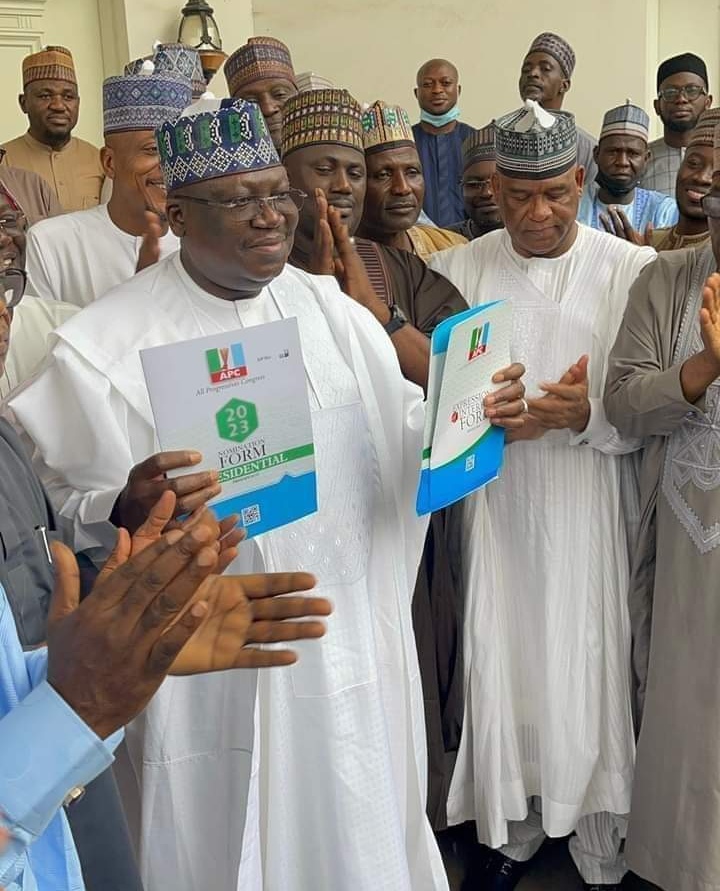 Ahead of Tuesday’s deadline for the sale of nomination and expression of interest forms, there has been a rush by aspirants as Senate President Ahmad Lawan, obtained his copy on Monday in Abuja.

The International Conference Centre, Abuja, was agog with activities as several aspirants vying for various electoral offices stormed the venue to obtain their forms at the last minute.

Some political associates of the Senate President were at the ICC to obtain forms saying Nigeria needs a “Nigerian president” and not one given to ethnic tendencies.

National Caucus of the party and 15 other Senators, purchased the form for him at the International Conference Centre, Abuja.

Senate President Ahmad Lawan has declared his intention to contest the 2023 presidential election on the platform of the All Progressives Congress (APC).

He becomes the 24th aspirant to pick the party’s expression of interest and nomination forms for the May 30 primary.

Lawan made the declaration on Monday in Abuja while receiving the N100 million APC nomination and expression of interest forms presented to him by a political group, National Stability Project, led by Chief Sam Nkire.

The Senate President said he had listened to various calls countrywide asking him to contest the office of the president and that he was ready to commit himself to the calls.

“I want to commit myself to this call from all walks of life. This is not my journey. This is our journey because every hand must be on deck to take the country to the next level,” he said.

Lawan said though he was joining the race very late because the field is saturated with aspirants, he assured Nigerians that he would play the game by the rules.

“I place my trust fully in the Almighty God on this journey,” he said.

Lawan has been at the National Assembly since 1999, serving two terms in the House of Representatives before moving to the Senate in 2007.

He made a failed bid to be Senate President in 2015 when Bukola Saraki won the seat despite the APC, the new ruling party at the time with a sizeable majority in the Chamber, nominating Lawan for the position.
Last year, posters of Lawan had appeared in Damaturu, the capital of his home Yobe State, and some other northern cities.