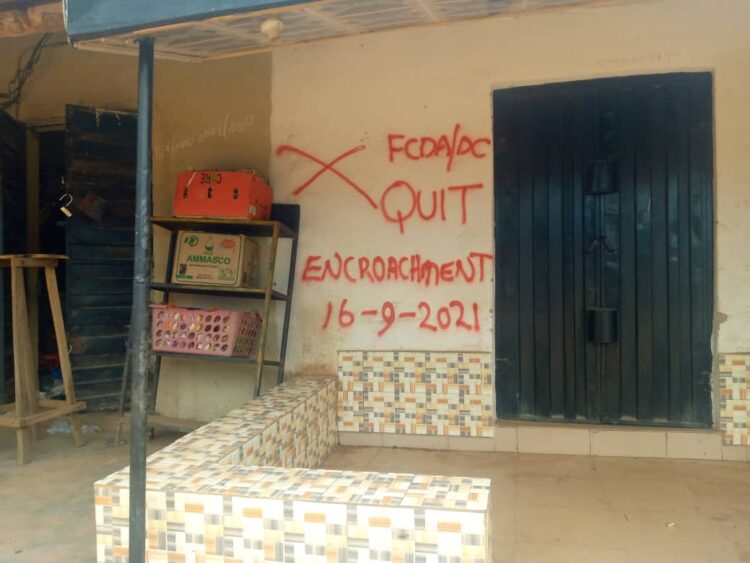 Federal Capital Territory Administration FCTA, has said plans are underway to pull down illegal structures that pave way for free flow of traffic the on Karu-Jikwoyi road.

Senior Special Assistant on Monitoring, Inspection and Enforcement to the minister of FCT, Ikharo Attah stated this at the weekend after inspecting the road with some stakeholders.

He explained that the removal of the structures billed for commencement soon, would halt the congestion of vehicles on the ever busy road, and not to infringe any pain on the traders or motorists that ply the route.

Recall that the officials of FCTA and Department of Development Control had in September 2021, marked most of the structures on the road for demolition.

Attah revealed that the minister of FCT Malam Muhammad Bello after an interface with the minister of Works and Housing, Babatunde Fashola on the speedy work on Abuja – Keffi express way, said the road was reaching advance stage of completion and the traffic that builds start from Nyanya through Karu, Jikwoyi, Kpegyi and Gidan-Mangoro down to Orozo.

He, therefore directed the City Sanitation team to ascertain the issues that bring about the endless grilock on the axis.

Attah disclosed that the congestion of vehicles on the route is being ignited by illegal trading, expansion and unconventional markets all over the road shoulders.

“The minister of FCT sent us down here to look at the situation and ascertain what are the issues, we have seen that there is heavy road side trading, illegal attachments, expansion towards the road and indiscriminate roadside markets, as well as problems accruing from the Jikwoyi phase II junction.

“We have assessed the situation and notify the minister that Jikwoyi phase II junction should be closed, anybody that want to turn will turn from Phase I, by transformer, turning in phase II is building traffic that reach to CBN junction”

On whether the prospective victims will be given time to vacate, Attah explained that some of the structures had been marked for long, therefore the demolition team would move in at anytime.

One of the stakeholders who spoke during the inspection, Deputy Director Department of Engineering Services, Federal Capital Development Authority (FCDA), Engr Richard Dauda said the area is one of the major satellite towns in the city that needs serious attention.

He said with the population in the area, there must be a way of controlling the traffic, “when the roads are blocked, people can’t pass through then the aim of developing the roads is defeated, there is need for measures to control it” he said.