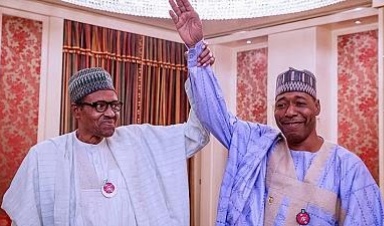 As the 2023 presidential election is fast approaching, All Progressives Congress, APC fielding a northern presidential candidate is becoming obvious to Counter PDP’s plan to present a northern candidate. The call for All Progressives Congress, APC to file Professor Babagana Zulum as it’s presidential candidate to counter whoever person, PDP will be fieding from former Vice President Atiku Abubakar and Governors Bala Mohammed, Aminu Tambuwal and Senator Bukola Saraki.

Senator Abdullahi Adamu has reignited the heated conversations about zoning again the APC national chairman recently said the ruling party had not taken a definite decision on the issue. The APC Chairman’s, comment has sparked rumours within the party that there are plans to file a northern candidate.

A source privy to the plans and arrangements told our correspondent that the All Progressives Congress (APC) may field a northern candidate that can compete with the Peoples Democratic Party (PDP) if the opposition party picks its presidential standard-bearer from the north ahead of the 2023 election.

In its choice of a northern candidate, the onus is on the All Progressives Congress, APC under Senator Adulahi Adamu to x-ray the political equations.  Adamu should know that former Vice President Atiku Abubakar and Governors Bala Mohammed, Aminu Tambuwal and Bukola Saraki are there to break into the “12 million vote bank,” and selecting a less renowned candidate in the APC means apocalypse for the party in 2023.

A southerner can succeed Buhari, There are strong indications within the APC that President Muhammadu Buhari’s successor will be a northerner. Hotmedia.ng gathered.

Credible source at the Villa revealed to our correspondent that the chieftains of the party (APC) in the north and some major APC support groups had started shopping for a strong presidential candidate from the North, if the PDP’s candidate is picked from the north.

As a matter of political exigency and paradigm shift, some major APC support groups has recommended Professor Babagana Zulum as the best and popular presidential material to face PDP. There is no aspirant today in the north who can foot the above bill better for the party than professor Zulum. The APC groups stated.

Governor Zulum, born August 25, 1969, is a professor who holds a Ph.D. in Agricultural and Environmental Engineering.  He has held senior positions in the academia including acting dean in the Faculty of Engineering at the University of Maiduguri, and in public administration including being the Principal Water Engineer in Bornu State, and at one time Rector of Ramat Polytechnic of which he is a product, and commissioner in the Kashim Shettima administration that he succeeded.

As governor, it can be said therefore that, for a 53 year old, Zulum has achieved enough to earn some bragging rights and distinguished himself from other Governors.

The 53 year old Professor Babagana Zulum will be one of the youngest among APC  Presidential aspirants if he declares to join the presidential race next week, which the call for a younger successor of president Muhammadu Buhari is on the high demand and gear.

It is highly known to everyone in the north that Zulum is honest, brave, courageous, competent, down to earth, no-nonsense, empathetic leader.

Few northerners, if any, can bet their dime against this. I am not doubting that there are candidates that can perform as well as Zulum in the PDP. However, politics, they say, is about perception. “2023 APC Presidential ticket favours professor Babagana Zulum”. The source said.

Governor Zulum has therefore found himself in the position of many other unintentional candidates who ruled this country before: Tafawa Balewa, 1976 Obasanjo, Shagari, 1984 Buhari, 1999 Obasanjo, Yar’adua, and Jonathan. That is to say that there have been behind the scene consultations on the matter between him and the Party.

According to the informations, although the APC was interested in zoning its presidential ticket to the south, the outcome of the PDP’s presidential primary scheduled for Saturday, May 28, and Sunday, May 29 would determine its final decision.

A member of the party’s National Working Committee, who decided to play anonymous told our correspondent: “The APC presidential ticket can go anywhere. In fact, we will get a strong northern candidate that can defeat the PDP if it zones its presidency to the north.”

In an interview with the News Agency of Nigeria on Monday, May 2, a founding member of the APC, Chief Osita Okechukwu, confirmed the possibility of a northerner emerging at the party’s presidential primary.