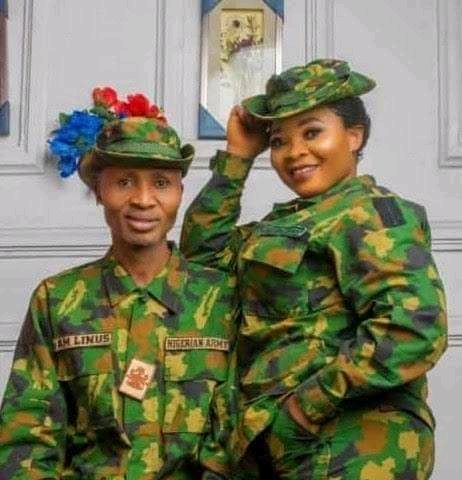 We the global family of the Indigenous People of Biafra (IPOB) under our great leader Mazi Nnamdi Kanu has come to the knowledge of the military plans to invade Igbo land in the name of looking for the criminals and hoodlums who murdered the newly-married Army couple in Imo State.

We want the soldiers to be mindful and apply professionalism in their duties because the world is watching them. IPOB is a peaceful movement and not responsible for the wicked murder of the said couple.

We are aware that soldiers are setting up the ground to Invade Igbo Land and massacre innocent people, why? The news about the kị́lling of the couple is not clear to the public. It is questionable. And we still don’t know why people are not asking questions like: how did the kị́llers manage to spot this soldiers among many commuters?

Were they on their private car or public vehicle when they were caught and kị́lled by these criminals? Where exactly were they kịlled or murdered? Why is it that the report didn’t answer these questions?

Why did the report just say on their way to Imo State? Where particularly in Imo State did this heinous crime occur? Were they on uniform or mulfty?

Does it mean that media houses cannot afford to ask these probing questions?

Nigeria soldiers must be lying and should stop any further plan to commit genocide in the Eastern region. Enemies of Biafra freedom and IPOB are jumping up and down accusing IPOB without proper investigations.

We are raising this alarm to alert the general public to disregard the accusations against IPOB or ESN operative about these young officers who were murdered in cold-blood.

Can someone that has been retired wear military uniforms while travelling?

Can a reasonable soldier still moved towards Imo state wearing his or her military uniform with the crimes army and Ebubeagu militia including recruited hoodlums committing in Orlu zone now? How come the kị́llers were too fast to put a call through to the alleged family or friend and post it online immediately? We want to know the point they are trying to prove.

IPOB is not responsible for every killing going-on in the South Eastern States but some evil politicians sponsoring cultists and hoodlums and Nigeria government and its security agencies supported them to carry on and repeatedly linking IPOB because they want to demonise agitators. We will soon expose the names of those behind the killings in the region.

The real motive behind linking IPOB with this barbarity is to use it as excuse to kill more innocent Biafrans. But God will judge the masterminds.

The way and manner the atrocity happen looked like the signature tune of FULANI terrorists. No reasonable Igbo or Biafran will make video of his rape action and beheading of an innocent fellow. It sounds very strange. Those behind the wickedness just want to demonise IPOB, yet the real mass murderers in the North kill and main with impunity without the Army rushing to the press. It’s unfortunate many people are not asking the right questions.

How is it possible for IPOB to go after a soldier, kill him or her and make a video saying they did it on video saying and mentioning Mazi Nnamdi Kanu name, when they are aware that same Mazi Nnamdi Kanu is facing charges and will not like killing innocent citizens? Soldiers do you people think that IPOB and ESN members are daft like that?Even if you don’t like IPOB, I still know you can see reason properly.

We have seen Boko Haram kị́ll soldiers and claim responsibility. No terrorists in the world deny their actions. In all the soldiers kịlled by Boko Haram, Nigerịa military have never mentioned their tribe. So why did Nigerịa military mention the tribe of the slain soldiers? Could it be that it was planned just to achieve one thing. Demonize IPOB? And give room for massacre of Igbo youths elsewhere in Nigeria?

We want referendum to be conducted in Biafraland to ascertain where everybody wants to belong either in Nigeria or Biafraland to settle this acrimonies against IPOB members.

It’s all the wicked fabrication of demoniacs, whom God has cursed.

Careful scrutiny has shown that the picture in circulation is not even the picture of any known Igbo person, let alone Igbo soldier.

No family in the entire Imo State and South East is loosing any soldier members of their family that was returning for any wedding. It’s all a lie. No village, community or Local Government Area in Ebonyi, Imo, Anambra, Abia and Enugu State has any record of such incidence taking place.