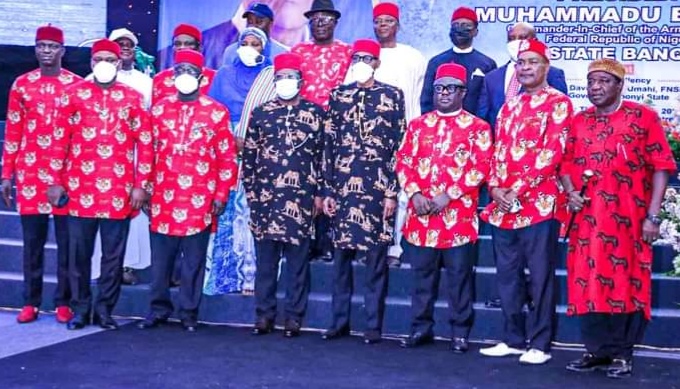 President Muhammadu Buhari has met with Ohanézè Ndígbo and other leaders of the Southeast on his visit to Ebnoyi State.

The meeting which was held at the New Exco Chambers, Government House Abakaliki also had in attendance Traditional rulers from the region.

President-General of Ohanézè George Obiozor led other members of the apex socio-cultural group to the meeting.

Governor David Umahi, who is also Chairman of Southeast Governors forum, was also at the meeting.

Ohanézè have tabled critical issues about the region to President Buhari.

Top of the list is the demand for the immediate release of the leader of the Indigenous People of Biafra(IPOB), Nnamdi Kanu from detention.

Other issues that have been discussed according to sources at the include electing a president of southeast extraction in the 2023 elections and an improvemnt of the security situation in the region.

President Muhammadu Buhari on Friday told Southeast leaders that the court will determine the fate of pro-separatist leader, Nnamdi Kanu.

He stated this during a meeting with leaders from the region at the New Government House Abakaliki, capital of the State.

The President was reacting to a demand by leaders of the region who pleaded with him to release Kanu and Igbo other youths in detention across the country.

They said they are in dialogue with dissident groups in the region with a view to bringing them to a round table discussion for return of peace.

But Buhari said he holds the view that Kanu’s matter should be properly adjudicated in the law court.

He expressed concerns over the worsening security situation in the region.

He said a few persons from the region have brainwashed and incited many against the government.

President Buhari is in Ebonyi State on a two-day working visit where he is expected to commission projects and also meet with other intereest groups.

Chairman of Southeast Traditional Rulers Council, Eze Charles Mkpuma read the address by the SouthEast Leaders demanding the immediate release of Nnamdi Kanu among Other issues of interest to the region.

In his address he said: “We plead with you to tamper Justice with mercy in the case of our son Nnamdi Kanu.”

Going Further Eze Mkpuma said the leaders have started discussion with all aggrieved groups and persons with a view to getting all of them to come to a roundtable discussion for an amicable resolution so that peace will return to the region.

The leaders commended the President for construction of second Niger Bridge, Akanu Bbiam Airport and many federal roads in the region.

Eze Mpamu also asked for the President’s support for the southeast to produce the next president.

Nnamdi Kanu who is the leader of the outlawed group IPOB/ESN has been on trial for Terrorism and National Security related cases since his capture by the nationas’ intelligence agencies in 2021 following his initial disappearance after jumping bail on similar offences in 2017.

He alleged at the time of his initial disappearance that his residence in Abia State came under military attack and he had to escape to safe his life and prevent bloodshed.

He was recaptured by agents of the Department of State Services and the National Intelligence Agency reportedly in Kenya though this has never been confirmed any of the concerned agency but has gained traction from his lawyers and supporters.

Other atrocities include the recent beheading of a Soldier couple who were in Imo State for their traditional wedding before meeting a very brutal and gruesome end.

The residence of the Imo State Governor, Hope Uzodinma, that of the President General of Ohanaeze Ndigbo, Professor George Obiozor and the Owerri Correctional Centre and Other places have come under attack allegedly from his followers leading to the loss of dozens of lives.

The call also comes against the background of comments made by President Muhammadu Buhari not to interfere with the judicial process.

This call will now be seen by observers as a test of his avowed resolve not to interfere in the Judicial process considering the fact that Nnamdi Kanu is currently standing trial in a case that borders on Terrorism and National Security offences before the Federal High Court in Abuja.

It will also come against the recent decision by the Government of the United Kingdom to revoke the consideration of membership of all groups associated with the Biafra struggle klike MASSOB, IPOB/ESN as an automatic criteria for granting asylum.

The United Kingdom based the decision on the various human rights violation and violent incidents and crimes attributed to the struggle both against State institutions and the general public.