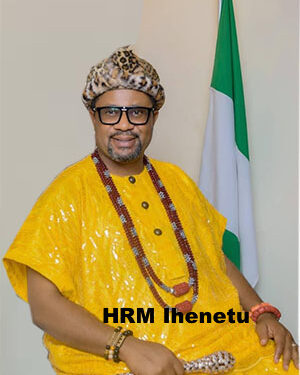 As a follow up to his earlier statement on how fairness and equity favours president of Igbo extraction in 2023, the  Eze Ndigbo Ghana and the Assistant Publicity Secretary, Association of Ndieze Ndigbo in the Diaspora, HRM Eze Dr Chukwudi Ihenetu has called for unity of purpose among all the Igbo presidential aspirants to enable them come out with a concensus candidate that will eventually represent  the  Igbo nation in the 2003 general election.

The Umuduruoha Amigbo Nwagele Imo-State born Royal Father made the remarks  at the sideline of a conference entitled: Abuja 2023, where Igbo presidential aspirants were advised on how they could unite to present a formidable candidate in 2023.

In the conference where he participated as one of the  Royal Father in the Diaspora with millions of subject and followers,  HRM Eze Dr Ihenetu quoting Afenifere chieftain, Chief Ayo Adebanjo in his key note address said: “Igbo have credible candidates who can move this nation foward, but they must come together as one to pick a concensus candidate who would represent them in the presidential race.

“Igbo must shun the seed of proliferation of candidates being sown by some elements to weaken the chances of one strong Igbo candidates at the primary.

“Nigeria’s founding fathers of pre and post colonial era has always made provision for power to rotate among the regions. the constitution in the first Republic also made provision for autonomy of regions and Resource control. That was the reason, the three regions of North, South West and South East developed at their own pace without infringement. That was why the regions even have their embassies in the UK in the first Republic”

On how the Nigeria’s president of Igbo extraction can emerge, HRM Dr Ihenetu whose intervention alongside other notable Nigerians in Ghana ended over 25 Years trade dispute between Nigeria traders and Ghana Trade Union, said only unity of purpose would do the magic.

“Although Ndigbo has influential, rich, powerful and well connected Nigerians in the Diaspora, unhealthy competition has always mar our  chances of producing president. I pray we get it right this time arround”,  the Royal father said .