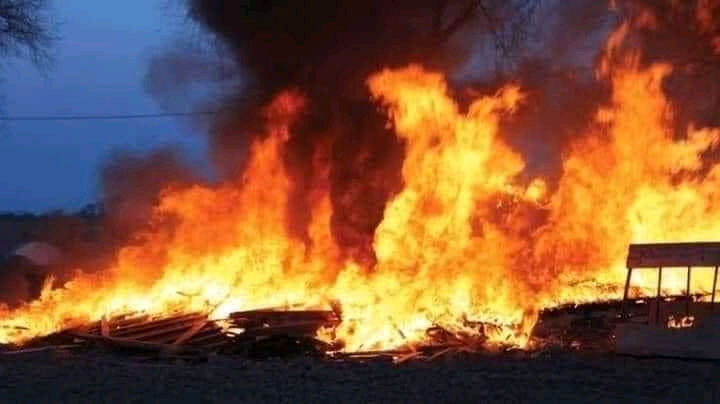 Is a black Saturday as about 80 people lost their lives at an Illegal Local Oil refinery popularly called ‘Kpo fire’ at Egbema kingdom in Ohaji-Egbema local government area of Imo State.

According to eyewitnesses the fire broke out after a pipe exploded at the site of the illegal refinery.

A reliable source who confirmed the incident, however, said he counted about 80 dead bodies from the vicinity, saying that more persons than estimated may have been affected by the fire.

According to him “about 80 people were there but not all of them were burnt to death”.

He said the community has remained calm but that tension is high in the forest where the fire broke out.

According to the report  the victims mostly youths have lost their lives to oil explosion early Saturday morning as a result of illegal oil refinery business popularly known as “Oil bunkering” in Egbema community of Egbema/Ohaji local government area of Imo State which happens to be one of the oil producing communities in the state.

The incident which was reported to have started around 1am early morning Saturday was as a result fire outbreak at Abaezi forest in Ohaji/Egbema illegal bunkering site.

It was gathered that about one hundred and fifty others sustained serious degrees of burns who many are currently receiving treatment in different hospitals in the area.

Reacting to the ugly incident , the Imo State Commissioner for Petroleum Resources, Goodluck Opiah, who represented Governor Hope Uzidinma of Imo State during his visit to the scene, said the fire consumed the lives of so many youths.

He said, “at the moment, I can’t really confirm the number of the deceased because many family members have removed the corpses of so many others.”

Opiah said Okenze Onyewoke, the owner of the illegal refinary, had been declared wanted by the government of Imo State.

He said, “apart from this calamity, the act has destroyed the acqatic life of the community. Our people before now are predorminantly farmers and fishermen.

“Look around, you’ll find smokes coming from this illegal act. If this is not enough for any person to stop, I think the community is heading for what I can’t describe.

“Most of the people who are engaging in this act are from Rivers, Bayelsa and other neigbouring States and it is sabotage for our people to allow this illegal act to continue.

“I wish to appeal to our youths to desist from making themselves available for this illegal act. This is a sucidal business they got themselves into.

Narrating the incident to our Correspondent, an eye witness, Francis Dike disclosed that the incident happened around 11pm last night.

He further revealed that residents of the community woke up to see the huge flame on the Abaezi forest.

Another eyewitness in the area who pleaded anonymity stated “this is too Much for a small village like this, what a painful thing in Egbema kingdom my heart is bleeding”

“How can these families survive this? Some families lost 3 souls and many more, how will they survive all this, Who did we really offend in this country, Why can’t there be job opportunities” he stated

The source leader however blamed the increasing practice of illegal refineries on lack of employment opportunities.

The Imo State Police Command is yet to react to the incident.