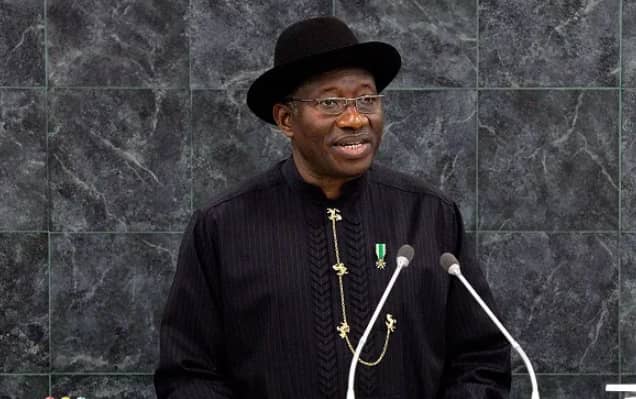 Former President Goodluck Jonathan has told his supporters calling on him to run for the 2023 presidency to “watch out”.

Some of his supporters stormed his Abuja office, on Friday, asking him to declare for the 2023 presidency.

They wielded placards and banners with inscriptions such as ‘Goodluck Jonathan must run for president 2023′, “Jonathan is our candidate’, among others.

The ex-president had gone into a closed door meeting with leaders of the group.

Addressing the supporters after the meeting, Jonathan said the youths should keep getting involved in the political process for a better Nigeria.

The ex-president said, “You are calling me to come and declare for the next election. I cannot tell you I’m declaring. The political process is ongoing, just watch out.

“The key role you must play is to pray that Nigeria gets somebody that carries the young people along; somebody that can also work very hard to see that some of the problems are addressed by the government and I believe collectively, we will work together.”

Some groups had also called on Jonathan to contest.

The Nigerian Young Professionals in Diaspora, NYPD, yesterday gave Jonathan one week ultimatum to declare for 2023 Presidential race or risked being sued.

The group which comprises of Young Professionals in Diaspora is made up of Nigerians from all over the Country who are based in different countries.

The convener of the group, Arc. Oladipo Akande in a press release made available to newsmen via email from Los Angeles, United States Of America stated that it was imperative for the former helmsman to throw his hat into the ring without further delay.

In 2011, he ran for the same office, won the election and ran the country till 2015 when he was defeated by President Muhammadu Buhari.

If he contests and wins the 2023 polls, he would run the country for only four years in line with the provisions of the 1999 Constitution (as amended).