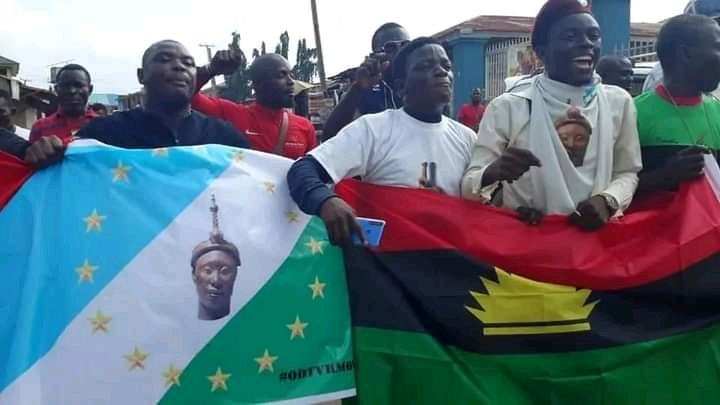 The Indigenous People of Biafra (IPOB) has announced plans to hold a one-million man match alongside peoples of the Oodua and Ambazonia nations, at the European Union Headquarters in Brussels, Belgium on June 14 and 15, 2022.

This announcement was included in a statement issued by Emma Powerful, the IPOB’s spokesperson.

According to the statement, the authorities in Brüssels, Belgium have approved the rally during which the nationalities will disclose their predicaments to the world.

IPOB is a separatist group seeking the breakaway of the South-East region from Nigeria; Ambazonian activists seek the secession of south-eastern Cameroon while the Oodua people are striving for self-independence of the South-West part of Nigeria (Yoruba).

The statement explained, “Following the consistent moves to restore Biafra, Oduduwa and Ambazonia by the global movements pursuing these three nations, we the global movement and family of the Indigenous People of Biafra ably led by our great and indefatigable leader Mazi Nnamdi Kanu, wish to announce to the good people of Biafra, friends of Biafra and lovers of freedom across the world that the emerging nations in Africa are expected to hold a one million man march at the European Union headquarters in Brussels, Belgium on the 14th and 15th June 2022.

“The one-million-man march for the emerging nations in West Africa will disclose our predicaments to the world on that day.

“The emerging nations of Biafra, Ambazonia and Oduduwa are expected to be in Belgium on the 14th and 15th of June 2022 at European Union headquarters in Brussels, Belgium to inform the European Union that they are prepared to be on their own.

“The protest for these emerging nations will display our need to get these nations and every Biafran, Oduduwa and Ambazonian citizen living in Europe, America Asia and home to be present on that day to grace the epoch event. It will be a landmark event and we must let Europeans know the reasons we pursue these nations’ existence.

“This is to show Europe and the entire world why we need these new nations in Africa to emerge.

“Therefore, our people must make sure they let the world understand our predicaments and what we are facing in the hands of Nigeria and Cameroon. The Nigerian Government and Cameroon government are terrorist nations and we will not allow them to trample on our people and kill them at random.

“The killings and burning of houses in these three emerging nations have gone beyond human comprehension, our people are dying every day in the hands of Nigerian and Cameroonian governments.

“Our people should come out en masse to let them know that we are seriously in need of these three emerging nations.

“IPOB, Ambazonia and Oduduwa nations are expecting their sons and daughters scattered all over the world because of the humiliation, torture and killings going on in our land.”