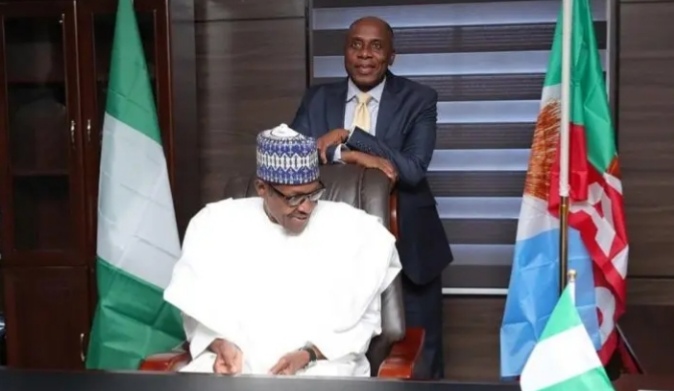 Some Nigerians on Twitter have reacted to the declaration of the Minister of Transportation, Rotimi Amaechi, for the 2023 presidency.

Amaechi: I grew up poor, the blood of every Nigerian flows in me
Amaechi declares interest in succeeding Buhari
Addressing a crowd of supporters and leaders of the All Progressives Congress (APC) at a thanksgiving service held at the Adokiye Amiesimaka Stadium, Port Harcourt, Amaechi said he was qualified for the job.

While some Nigerians described him as the right man to succeed President Muhammadu Buhari, others said it would be an unwise decision to vote for him.

@biggman90 wrote, “If APC really wants to win the 2023 election this is the man for the Job. Rt. Chibuike Rotimi Ameachi have a good track record and will deliver good governance in Nigeria.#Amaechi 2023”

@SadiqTade said, “Amaechi is an ingrate. Tinubu made him and it is funny that he has now declared interest for the same position as Tinubu.”

@roqzee said, “Rotimi Amaechi is the only person today that can beat Tinubu in a money spending election. South South oil money from Delta & Rivers State, his allegiance to the north on public infrastructure projects these 8 years & the need for the Presidency to not go to the South West again.”

@BasilOlemerezi said, “Amaechi official declaration has no mate. When I said Amaechi is the only Presidential candidate that understands National politics a few weeks ago some thought I was joking, see declaration with levels. Not those ones that did their own on pages of blogs.”

@TheoAbuAgada said, “Now that Amaechi has formally declared his intention to run for 2023 Presidency, I expect him to honorably tender his resignation as Minister of Transportation. The right thing to do.”

@emmaikumeh said, “Amaechi declaration has changed the dynamic of politics in Rivers state. It’s going to be interesting.”

@jessiehallidaygi said, “Barely few days since Bandits attacked a train filled with passengers built by Amaechi, No national Mourning for the dead victims, no visiting of victims family,Today he is announcing his bid to run for the office of the presidency. This country ehh no die for this country oo”