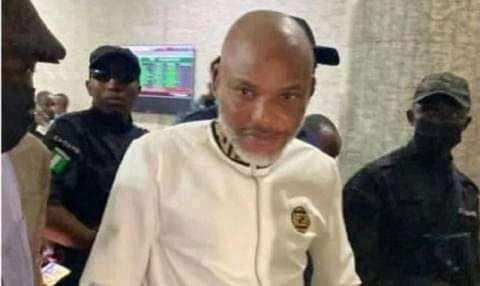 Aloy Ejimakor, Special Counsel to Nnamdi Kanu, leader of the Indigenous People of Biafra, has assured that his client would be granted bail on May 18, 2022.

Justice Binta Nyako struck out the eight-count charge on the grounds that the proof of evidence did not link Kanu to the allegations.

The judge delivered a ruling on a preliminary objection the Biafran leader raised against all the charges.

Following the ruling, the judge had slated a hearing for Kanu’s bail application for May 18, 2022.

Reacting, Ejimakor congratulated his fellow counsels for the feat achieved.

In a tweet, the Special Counsel wrote, “Congratulations to my colleagues who were on ground yesterday to receive the 8-count strike out.

“It’s great that the Umuahia judgment was brought to bear on the bail application moved by SAN Ozekhome. I’m confident that #MNK will make bail on 18th May. Team work pays. #Igwebuike.”