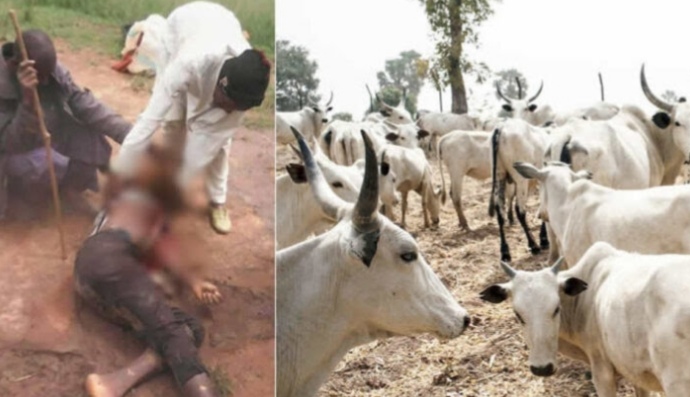 Unknown gunmen have shot dead over 20 cows and several goats at the Nkwo Igboukwu market in the Aguata local government area of Anambra State.

Some residents who were thrown into a state of confusion following the incident, gathered around the dead livestock, deliberating what could have happened.

From videos shared, some of the traders were seen running, as they assumed the gunmen came back to attack. However, they returned when they observed their assumption was baseless.

A man said, “People can just start running at any time. We are just being vigilant. This is happening live at Igboukwu.”

Another added, “This just happened in Nkwo Igboukwu, just now in Nkwo Igboukwu, look at the cattle that was shot, honestly. Even goats were not spared. The things you have been hearing are true. It is not a trivial matter at all.”

Some of the traders examined the gunshot wounds on some of the cattle that have been killed as they stood in circles discussing.

It was learnt that several buildings, including administrative blocks and parked vehicles, were among the facilities torched.

This comes a few days after a gang of armed men targeted the secretariat of Nnewi South Local Government Area in the state.

On Wednesday, Governor Chukwuma Soludo set up a committee to unravel the true cause of the armed struggle in the South East, which has led to insecurity in the region.

Membership of the committee cuts across the five South-East states of Anambra, Abia, Ebonyi, Enugu and Imo.

The committee to be headed by Prof Chidi Odinkalu, with Ambassador Bianca Ojukwu as secretary is termed Truth, Justice and Peace Committee.

Just some days ago, the governor directed the people of the state to observe a one-day prayer to counter the “evil” effect of the Monday sit-at-home order.

Soludo had ordered the prayer session which he said would work against the activities of the gunmen terrorising the state and the South-East region.

But residents shunned the programme as the governor and only a few other persons were sighted in the church.

From photos shared on social media, the governor, government officials and a few other persons were sighted offering prayers in an almost empty church.