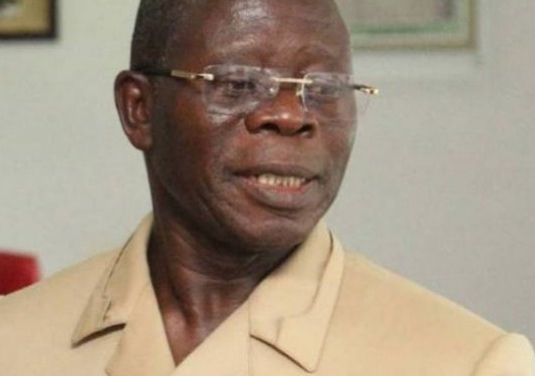 I resisted the temptation to be surprised when I read that Mr. Adams Oshiomhole has declared his intention to run for Edo North Senatorial District’s seat against the backdrop of his orchestrated media blitzkrieg for several months, pretending not to be interested in what looks like ‘he’s being prodded by the people to pursue his well-converted political ambition.

Known for petulant and baleful politics of turning victors to losers at elections; fixated conviction that he is the only star that could shine in the firmament of Nigeria politics; crushing and asphyxiating every other person who would not share his retrogressive worldview, Oshiomhole’s recent political action is axiomatic of a nightmarish mindset that needs both educational and spiritual exorcism.

Oshiomhole’s 8-year governorship was a misnomer. It was a tenure solely used to develop the three Local Government Areas of Etsako East, West and Central and his people hundred percent without tangential visible infrastructure in Owan East and West and Akoko-Edo Local Government Areas that made up Edo North Senatorial District. As a demagogue with little or no depth and a willer dealer, Oshiomhole easily rode the roughshod as a slave driver and told everyone else to go hug transformer!

Oshiomhole’s swift and irreversible descent into ethnic potentate which is now a time bomb of tragedy began with the loosening of the fissures that bind Afenmai people together before his unfortunate promotion of the Etsako people over and above the Owans and Akoko-Edo people. Throughout Adams Oshiomhole’s Governorship, no single road was constructed in Owan West, ditto Owan East, apart from Ihievbe Ogben and Ago roads that were haphazardly constructed and abandoned. The only road Oshiomhole made an attempt to construct in Akoko-Edo all through his 8-year in office is Igarra-Uneme -Osu- Ojah road, which has since collapsed. For the same period under review, Oshiomhole constructed over twenty five solid roads in and around Etsako homeland, comprising the three Local Government Areas earlier mentioned.

It would interest the general public to know that virtually all the political positions since Oshiomhole’s era have gone to Etsako people. Here is a few of the list:

(3) Member of EFCC board, Etsako man,

(9) He was also a former APC National Chairman

Now this: where is the place of fairness, equality, justice and patriotism if a part of a whole of equal status and proportion is virtually elevated at the detriment of the others? What is the basis for criticising Northern Nigeria oligarchs who tenaciously dominate the nation’s political economy when a pocket tyrant and an ethnic champion like Oshiomhole has perfected primitive and a worst form of ethnic dominance in Afenmai land?

Regrettably, court jesters in Edo North politics who should be bemoaning the terrible plight of the rest of Edo North people over Oshiomhole’s despotism and intolerance are celebrating his notorious foibles. For those adept at reading the rustling tea leaves, Oshiomhole’s entrance into the Senatorial race will be the beginning of the end, having become the founding father of the theatre of the absurd!

What Oshiomhole’s irruption means is that the rest of the political leaders in Owan and Akoko-Edo who are burying their heads in the land like the ostrich and allowing him to torpedo their confidence and ability to believe in themselves will be catastrophic in the long run, should Oshiomhole have his way.

The question has been repeatedly asked: who will bell the cat in the midst of seething tensions and abominable dominance by Oshiomhole? People such as Prof Julius Ihonvbere, Domingo Obende, Pally Iriase, Rev. Peter Obadan, Peter Akpatason, Dr Tunde Lakoju, Jemitola Annena, Yisa Braimoh, Johnson Abolagba, Abdulganiu Lawani, Abdul Oroh, Omo Ezomon, General Martins Airende, and the rest should know that it is their responsibility to lift their people out of the serpentine pit of political relegation by their own bootstraps.

If I may ask, what sort of human race becomes reliably powerless, helpless, unresisting, and subdued before an illiterate bully-eye moneybag political cramp? It will be counter-productive if there’s no one in sight in Owan and Akoko-Edo to beam a visionary searchlight to illuminate the passage of a confused and disoriented populace to rescue the people from Oshiomhole’s political strangulation.

While the likes of Asiwaju Bola Tinubu and Vice President Yemi Osinbajo are  campaigning for the nation’s presidency from Southwest, Oshiomhole’s dead trapped, pigeonholing himself to the Senate seat in Edo North. Why is it difficult for Oshiomhole to think presidency knowing that Southwest had presidency for 8-year under Olusegun Obasanjo’s era and that they’re having their fare share again with Prof Yemi Osinbajo’s Vice Presidency.

Even now, a jubilant lots are happy with Oshiomhole’s arrogance of power jinxed by an antediluvian worldview of a Stone Aged society! Afenmai people cannot afford to accommodate ethnic warlord who sees the rest of the world from his narrowed mindset of politics of exclusion. The ethnic tyrant called Oshiomhole must be resisted.

Erasmus Ikhide can be reached via: ikhideerasmus@gmail.com