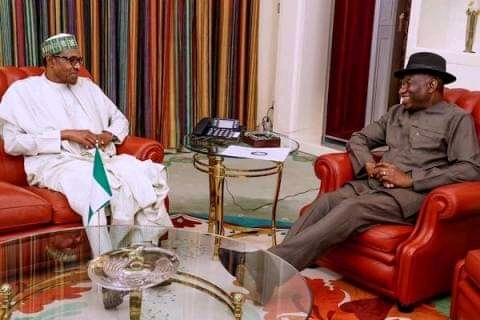 President Muhammadu Buhari and former President Goodluck Jonathan are currently having a meeting at the State House, Abuja.

Jonathan arrived at the Presidential Villa at about 3pm on Thursday.

However, the purpose of his visit was not known as of press time.

It was learnt that Jonathan might have visited the Villa to brief the president on his activities as ECOWAS Chief Mediator in Mali.

Meanwhile, there were also reports of plans by Jonathan to defect to the All Progressives Congress (APC) from the Peoples Democratic Party (PDP).

Hotmedia.ng learnt that the APC cabal loyal to President Muhammadu Buhari was indeed keen to bring Jonathan into the party for several reasons, including to frustrate the ambition of the national leader of the party, Bola Tinubu, who is eyeing the presidency in 2023.

A top source had told our correspondent in September 2021 that Buhari had started courting Jonathan to bring him into the APC to run for the presidency and succeed him.

According to the source, the Presidency cabal wants to make Jonathan the next president as they believe he would not investigate the atrocities committed by Buhari’s regime.

Jonathan is also purportedly nursing a presidential ambition to complete two terms in office, an opportunity denied him by the APC in the 2015 presidential election.

He has reportedly agreed to play the game, especially considering the slim chances he has in the PDP for 2023 with the wealth and connection of former Vice-President, Atiku Abubakar.

Atiku was the PDP presidential candidate in the 2019 election.

Although Atiku has yet to declare interest in the race, he appears to be testing the waters, as some groups showing support for his 2023 ambition have already emerged.

The source further said Jonathan is also wary of the threat posed by the ambitions of the Governors of Sokoto and Rivers states, Aminu Tambuwal and Nyesom Wike respectively, said to be considering a joint ticket.

However, Jonathan was said to have been given certain conditions by Buhari’s cabal which have yet to be fully fulfilled hence the delay in joining the ruling party.