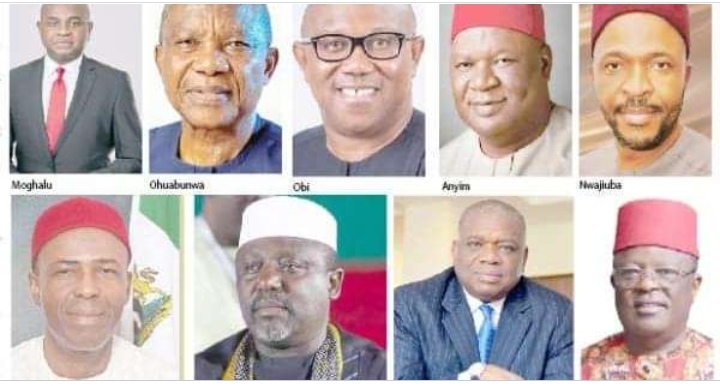 List of top South-East political bigwigs eyeing the number one job in the country come 2023.

The race for which geo-political zone produces President Muhammadu Buhari’s successor is getting intense, just as the regions continue to advance their case for the top seat.

However, the clamour for a South East presidency has resonated in the build-up to 2023.

Recall that while the apex Igbo socio-cultural group, Ohanaeze Ndigbo,  has attracted measurable support from their counterparts in the South in the quest for a president of Igbo extractionin 2023, the clamour has been met withcalls from other regional bodies, especially in the North, for the South East to embark on more political engagements with others blocs.

Elder statesman and founding member of the Arewa Consultative Forum (ACF), Tanko Yakasai, in an interview with Channels Television last month, said the missing ingredient in the South East’s drive to lead the country in 2023 is the dearth of constructive engagement with other regions.

He said, “I am a strong supporter of a president from the South after Buhari and also if he can come from the South East, no problem, I will support it.

“The quarrel is that this is not something that you just stay at home and think that people will come to your house to dash (gift) it to you.

“You have to show interest, you have to be serious, you have to try to convince people that you are really up to the task. This is what in my opinion is missing in the South East.”

Most of the presidential hopefuls from the South East have been embarking on wide consultations across the country.

While some have openly declared their intentions to contest the top seat and have since commenced broadconsultations, others are still engaged in behind the scene discussions.

Still for others, they have deployed proxy groups from various parts of the country to begin grassroot mobilisation. But how they fair in their respective parties is another matter as the discussion on zoning remains contentious and inconclusive.

However, looks at some of the top contenders so far in the race.

Moghalu was the first aspirant to openly declare his ambition to be president in 2023 on June 1, 2021. A former presidential candidate of Young Progressive Party (YPP) in 2019, he has since continued to engage the political space even though he tends toward trying to rewrite the narrative about Nigeria in the international community with speeches at different fora

A lawyer, author, former United Nations official, who also served as deputy governor of the Central Bank of Nigeria, Moghalu is perceived, in some quarters, as a new face of politics, drawing from his robust academic and diaspora base. He, however, has the task of not being perceived as being too elitist in his politics.

Also, having pitched his political tent with African Democratic Congress (ADC) which is not one of the major parties, he would hope to galvanise the neo-progressive political movement, thebusiness community and the savvy young population.

Mazi Samuel Ohuabunwa is renowned as a businessman and founder/former CEO of Neimeth Pharmaceutical. He was also a former president of the Pharmaceutical Society of Nigeria.

He, just like Moghalu, has formally declared his intention to run for president. Although he is a staunch member of the Peoples Democratic Party (PDP), Ohuabunwa, is also the convener of the New Nigeria Group (NNG), a non-partisan group dedicated to changing the Nigerian narrative.

A recipient of three national awards by three different presidents, namely Olusegun Obasanjo (2001); Goodluck Jonathan (2011) and Muhammadu Buhari (2018), the head of the Ohuabunwa dynasty hopes to strike a chord with all the critical stakeholders in the voting demography. But whether the most influential power bloc in his party, PDP, will back him is another matter.

He is regarded as one of the closest politicians to President Buhari from the South East. This is so because Nwajiuba, beyond his keen intellect andcalm but pragmatic political disposition, has proved over the years to be a loyal party man. He is one of the few that has remained consistent politically.

As minister of state for education, Nwajiuba is yet to declare for the top seat even though insiders argue that he is regarded as one of the serious contenders. He has also beenconsulting over the matter.

But he has a tough battle ahead for the APC ticket. He is a dark horse in the contest.

Astute businessman and an accomplished administrator, has solid experience in the corporate world and in public governance.

Obi is in the category of those who are yet to declare for the presidency ahead of 2023. The thinking within the political space is that with his brilliant performance as Anambra State governor, he would be a formidable contender in the light of his strong background in prudence. Also, he proved he is not a pushover politically with the way he emerged the PDP vice presidential candidate in 2019.

Anyim has cognate experience. He has served as Senate president and as secretary to the government of the federation (SGF). With these high positions, Anyim, a PDP stalwart, seemingly has an edge with regards to political capital and goodwill, if well harnessed.

He has also made public his intention to vie for the top seat. Interestingly, his declaration came shortly after he was called for questioning by the Economic and Financial Crimes Commission (EFCC) in October. While some reports have it that he was detained by the anti-graft agency for two days, he clarified that he visited the commission of his own volition because his name was mentioned in a corruption case. However, there are reports he has been embarking on consultations with former presidents and elder statesmen to advance his case. Getting the PDP will come at a huge cost as he will be up against other contenders who boast of equally intimidating political CVs.

He is the minister of science and technology. For the former national chairman of one of the defunct legacy parties (ANPP) that formed APC, Onu has remained rather out of the power equation.

He belongs in the class of those who have not declared for the seat probably because they are still serving as ministers and wouldn’t want to cause any form of distraction for the administration. While he seems rather laid back about the whole prospect of a presidency, perhaps, hoping that the lot might fall to him, he is renowned for his political party consistency and dogmatic approach to politics.

The former Imo State governor is no stranger to competing for the presidency having done so in 2003 and 2015. Although he is having a rough patch within his party, APC, Okorocha is also poised to join the contest. Like others, he has yet to formally declare for the top seat, but his new political crusade, which sees him attempting to forge an alliance beyond his party, smacks of his strategy for the 2023 contest. If he hopes to run on the platform of the APC, his major hurdle would be his successor, Governor Hope Uzodimma, with whom he has been locked in a long battle for supremacy in the state.

Kalu is also not new to the contest for presidency.

The chairman of SLOK Holding and media mogul had contested the presidency in 2007 on the platform of Progressive Peoples Alliance (PPA), a party he formed.

So far, loyalists of the former Abia State governor have been mobilising support for him with one of such groups threatening to sue him if he refuses to contest. Another group said it was mobilising others for a one-million-man march to persuade him to declare for president in 2023.

The Senate chief whip has also been embarking on consultations and enjoys a long relationship with some of the top former generals.

Although he has not formally declared his intention to run for the highest office in the land, Governor Umahi is seen as one of the contenders. The former PDP stalwart who joined APC in 2020 is projected as being one of the top personalities in the party from the zone that will seek the ticket. He has canvassed for fair treatment of the Igbo within the political space, one of the reasons he adduced for leaving the PDP for the ruling APC.

Only recently, the Ebonyi State commissioner of information, Barrister Orji Uchenna Orji, recalled that Ebonyi leaders and elders issued a communiqué and resolved to tell the world that Umahi has got a commodity that can change the narrative of this country.

As for the tough task of securing the party’s ticket, Umahi hopes to leverage on his closeness to President Buhari which he has openly displayed even when he was in the PDP.