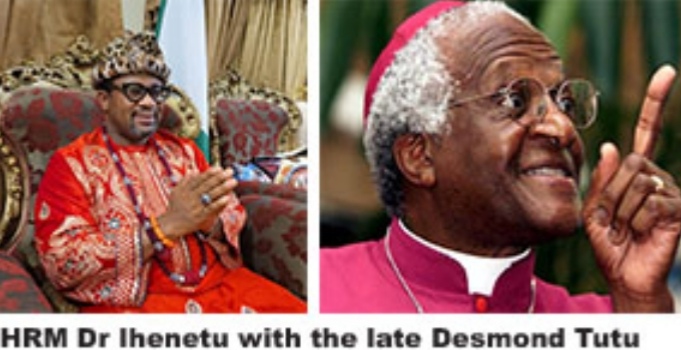 As the international community mourn the death of Nobel Peace Laureate and one of South Africa’s surviving apartheid icon Desmond Tutu at the age of 90, the Eze Ndigbo Ghana, HRM Dr. Chukwudi Ihenetu has joined other eminent world leaders to pay tribute to the late sage.

The death of Tutu was confirmed in a statement on Sunday by South African President Cyril Ramaphosa.

In his condolences to Tutu’s family, HRM Dr. Ihenetu who is also the Assistant Publicity Secretary Association of Ndieze Ndigbo In the Diaspora described him as “a great African without equal.”

Earlier, South Africa president, Cyril Ramaphosa said Tutu was “ a man of extraordinary intellect, integrity and invincibility against the forces of apartheid, he was also tender and vulnerable in his compassion for those who had suffered oppression, injustice and violence under apartheid, and oppressed and downtrodden people around the world.”

Going down memories, HRM Dr. Ihenetu said Tutu was a moral giant who won the Nobel Peace Prize in 1984 for his non-violent struggle against apartheid. “Following his tirelessly sojourn across the world throughout the 1980s, Tutu became the face of the anti-apartheid movement abroad while many of the leaders of the rebel African National Congress (ANC), such as Nelson Mandela, were behind bars.”

Named the first Black Archbishop of Cape Town in 1986 and becoming the head of the Anglican Church, South Africa’s fourth largest, HRM Dr. Ihenetu said the late Tutu used his position as a clergy to draw attention of international community to plight of black Africans in South Africa, during the apartheid era.

Furthermore, HRM Dr. Ihenetu said Tutu, a schoolteacher’s son, born in Klerksdorp, a conservative town west of Johannesburg, on Oct. 7, 1931remained one of the greatest African on earth.
in a message to spouse of Tutu, Mrs. Leah Tutu, HRM Ihenetu urges her to take heart. The Royal father prayed for God to give the family the fortitude to bear the loss.