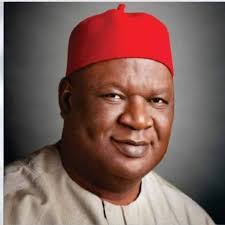 An exclusive interview with Mr Oswald Okebata the founder and the Chief executive officer of Timjul Dynamic Services Ltd, on why South-East must produce the next president of Nigeria in 2023 and the most preferable candidate.

1. HOTMEDIA.NG : Tell Us About Yourself And Your Organization Timjul Dynamic Services Ltd?

Timjul Dynamic Services Ltd is a strategic professional political and business consulting organization with specialist partners in the United State and Canada.

When i recognized the great need for Nigerian Politicians to be more informed on how constitutional democracy should be operated in order to bring the dividends of democracy back to the people.

Our goals and purpose are to help political parties, politicians, unions, community organizations, good democratic governments and companies navigate the complex world of public messaging that will impact the target market positively, and as a result help to achieve their objectives.

As a political Consulting organization, we assist political parties and campaigns in designing, analyzing, implementing high – impact messaging through a wide variety of media. Crafting rapid – response message to a developing situation during political or public sector campaigns.

Manifesto development and opinion research. We also conduct voters polling to field strategy and get out the vote’s efforts.

2. HOTMEDIA.NG : What Are The Reasons Nigeria President In 2023 Must Come From South-East ?

‎”I feel so sorry for those who think that they can hide under one finger to say that the South-Eastern part of Nigeria should not produce the next president of Nigeria.

I firmly belief that the presidency of Nigeria in 2023 must go to the Southern part of Nigeria and indeed to South-East zone.  Nigerian President Of Igbo extraction would help develop Nigeria because the Southeast is “talented to do so.”

3. HOTMEDIA.NG:  What Advice Can You Give To Southeast To Galvanize Support Of Other Regions?

Oswald Okebata: The advised that though the card lays now on the desk of the South Easterners, the region must try to reach out to garner support for its goal to be achieved when the polls come around from other regions.

South East  have to show strong interest, they have to be serious, they have to try to convince people that you are really up to the task.” then present a popular, credible and acceptable candidate.

4. HOTMEDIA.NG:  If South-East Must Produce Next Nigerian President In 2023, Who Should Be The Candidate?

Oswald Okebata :  A candidate that is more approachable, more experienced and Knowledgeable of the issues of the country.
More effective, ability to connect to voters, fix Nigerian challenges and work hard to unite Nigeria for progress and development. The candidate is the former Senate President and Secretary to the Government of the Federation, Senator Anyim Pius Anyim.

5. HOTMEDIA.NG: Why Do You Prefer Senator Anyim Pius Anyim As The Candidate?

Oswald Okebata : Senator Anyim Pius Anyim is a great personality with integrity and experience, former President of the Senate, ex-Secretary to the Government of the Federation, exemplary bridge-builder and foremost humanist.

Chief, Senator Anyim Pius Anyim (GCON); fondly called the gentle giant is the man Nigeria needs now to compete with the world. As SGF, Senator Anyim was responsible for ensuring the effective coordination and monitoring of the implementation of Federal Government policies.

Oswald Okebata: Senator Anyim Pius Anyim (born February 19, 1961) hails from Ivo, Ebonyi State, Nigeria. He is a Former Senate President of Nigeria and a former Secretary to the Government of the Federation (SGF).

Before his appointment as SGF, Senator Anyim was elected as a Senator for Ebonyi South senatorial zone in 1999. In August 2000, he was appointed Senate President of Nigeria, a position which he held until 2003 when he declined to seek re-election to the Nigerian Senate.

In 1992, Anyim was appointed as the Head of Protection Department at the National Commission for Refugees, Abuja.

After Ebonyi State was created in 1996 by the late Head of State, General Sani Abacha, Anyim decided to run for the Senate as a Senator from Ebonyi State. In 1998 he joined the United Nigeria Congress Party ( UNCP ) and won election to the Senate but the death of General Abacha on 8 June 1998 nullified the result.

During the transitional regime of General Abdulsalami Abubakar, Senator Anyim joined the PDP and again ran successfully for election to the Senate .

Senator Anyim took office in the Senate on May 1999 and was appointed by his peers as the President of the Senate in August 2000. He held the office until the end of the Obasanjo administration in May 2003, becoming the first President of the Nigerian Senate to have survived impeachment during the 1999-2003 political dispensation.

Senator Anyim led a very dynamic Nigerian Senate. In May 2001, Senator Anyim declared that the upper legislative house was justified in probing the activities of the Mines and Power Ministry during the tenure of Chief Bola Ige.

In June 2002, under the leadership of Senator Anyim, the Nigerian Senate following a motion proposed by Senator Idris Abubakar attempted to impeach President Olusegun Obasanjo for obstructing the work of the National Assembly.

This turned out to become the most high profile engagement between the Executive and Legislative arms of Government in the Federal Republic of Nigeria.

In August 2002, Senator Anyim declared that he was opposed to all office holders including himself from seeking a second term in office. Senator Anyim kept his word and did not seek re-election to the Senate in 2003.

Following his hiatus from politics, Senator Anyim was chosen as a candidate in the elections for Chairmanship of the PDP in January 2008. In November 2007 the chairman of the Kaduna State chapter of the PDP said that Senator Anyim would receive the votes of the entire Kaduna State delegation to the convention. In January 2008 the League of Patriotic Lawyers supported his candidature. He also gained support from the Peoples Democratic Party Youth Forum. However, in the end Prince Vincent Ogbulafor was appointed PDP chairman.

In January 2010, Senator Anyim led a delegation of 41 eminent Nigerians that called on President Umaru Yar’Adua to urgently transmit a letter of his incapacitation to the National Assembly to salvage the nation’s democracy from danger.

7. HOTMEDIA.NG: What Are Your Advice To Senator Pius Anyim?

Oswald Okebata : Pius Anyim, has to be upbeat in lobbying the North and other regions in the south to rally round his presidential bid.  Senator Pius Anyim to work hard with other leaders across the country to build consensus for equity and unity in Nigeria.

Ayim has to consistently engaged in the political process and Nigerians to strategically support and choose him as the most preferred and suitable candidate for president come 2023,”

8.HOTMEDIA.NG: With The Recent Agitation In The Southeast For Secession And Clamor For Power To Shift To Southeast. Do You Think Nigerian President Of South East Extractions Will Stop The Agitation?

Oswald Okebata: “2023  Presidency of Igbo extraction is very feasible. The consequences of denying the Igbo the 2023 Presidency will strengthen agitations and it will sink Nigeria’s corporate existence and threaten its unity.

“The expectation of Igbo to achieve the desired results of having an Igbo succeed President Buhari in 2023 is ongoing.

9. HOTMEDIA.NG: What Is Your View About The Recent Electoral Amendment Bill. For All Political Parties To Use Direct Primaries To Nominate Its Candidates?

The recent passage of the Electoral Act Amendment Bill 2021 by Nigeria’s National Assembly inserting direct primaries as the legal mode for political parties to pick their candidates for general elections is currently dominating discourse in the polity.

Unlike indirect primary, which is organised in a particular selected venue, and is often restricted to only delegates, the direct primaries take place at ward levels.

It is the inalienable right of each political party, within the context of our constitutional democracy, to decide its form of internal democratic practices, including the processes of nominating its candidates for elections at any level.

The electoral law should allow political parties to adopt any of the processes suitable for them in conducting their primaries. The adoption of direct party primaries will only give the governors more power to do whatever they want,”

Thank you and God bless you.