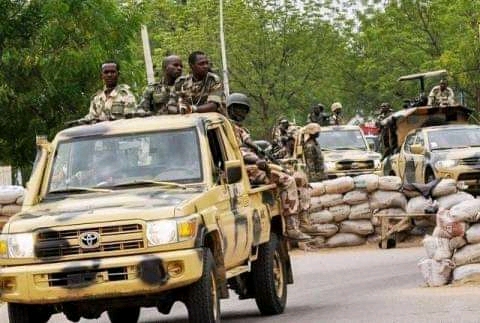 According to BBC Pidgin, the security teams were said to have stormed the camps situated in two states.

It was learnt that the kidnappers invaded a community each in Orsu and Ihiala local government areas and took land areas for themselves.

“When we got there, we noticed the community had been abandoned and these boys had taken over the community. They carve out lands for themselves and that is another brand of insurgency.

“The place is just a ghost town, everybody has disappeared from these towns,” the DSS boss said.

During the raid, the team rescued one Eze Iheanacho Ndukwe from Okigwe who was kidnapped some days ago.

Idaminabo said human parts were also scattered all over the place.

“Surprisingly, in this 21st century, we noticed people still practise cannibalism-eating human flesh because we also found roasted human flesh there,” he said.

Meanwhile, the Imo State Governor, Hope Uzodinma, in his reaction to the security operations, expressed his joy over the arrest, describing the criminals as cannibals and bandits.

“At least Imo people will go home to celebrate Christmas. We were wondering how an entire local government like Orsu local government would be abandoned to the hands of criminals and cannibals who roast and eat human beings,” the governor said.

Other things recovered at the scene were cars and several dead bodies.

After a gun duel between the security forces and some of the suspected criminals, 30 suspected kidnappers were arrested in Imo State.

A traditional ruler, Acho Ndukwe, who was abducted in the Okigwe Local Government Area on Sunday was released during the raid.