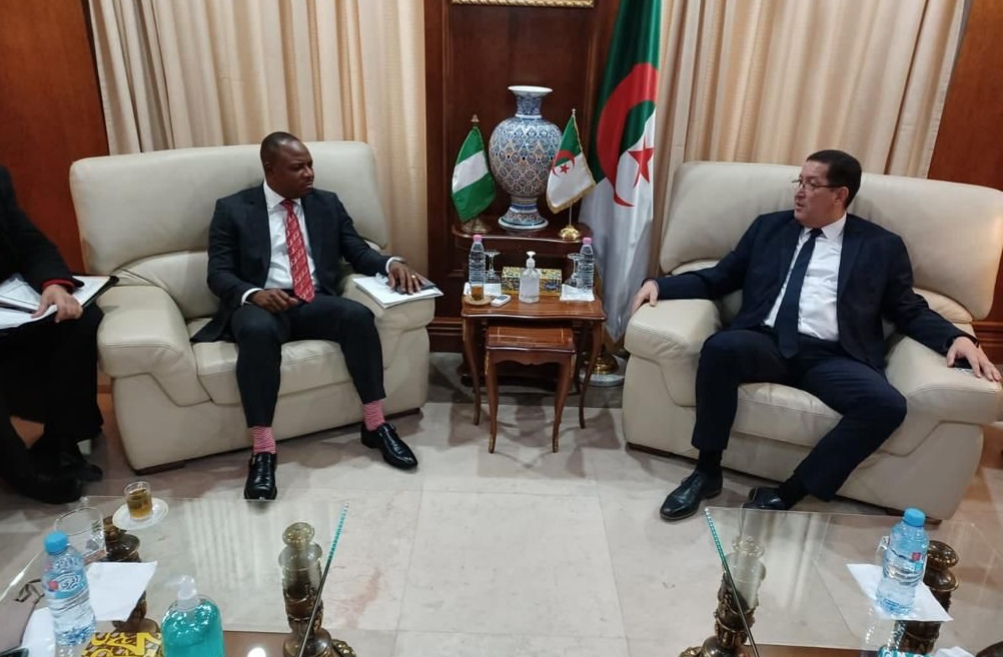 The Permanent Secretary, Ministry of Foreign Affairs, Ambassador Gabriel Tanimu Aduda, has called for enhanced bilateral cooperation between the Federal Republic of Nigeria and the People’s Democratic Republic of Algeria, at the 3rd session of the Algerian-Nigerian political consultation held in Algiers, on 5th December, 2021.

In a statement issued by the Embassy of Nigeria in Algiers, 6th December, 2021.

Ambassador Aduda made the call when he met separately with the Secretary General of the Ministry of Foreign Affairs of Algeria, H.E. Mr. Chakib Rachid Kaid, on Sunday, 5th December, 2021 and the Secretary-General of the Ministry of Energy and Mines of Algeria, Mr. Abdelkrim Aouissi, on Monday, 6th December, 2021 during an official visit to Algiers, Algeria.

In his meeting with Mr. Kaid, the Permanent Secretary commended the warm and cordial relations existing between the two countries and highlighted the importance of improving business relations. He particularly stressed the need for direct air links between the two countries, which he said would greatly reduce the travel time between both countries as against the current practice of going through Europe.

This, he said, will greatly foster business relations and open up access to neighbouring countries that are also experiencing flight difficulties and, in that regard, called on the Algerian Government to take advantage of the existing Bilateral Air Services Agreement between the two countries and designate Air Algerie to ply the route.

The Permanent Secretary also lauded the Algerian government for the strong cooperation with Nigeria in higher/tertiary education and called for increased scholarship opportunities for Nigerian students in Algerian institutions.

The two officials reviewed the bilateral relations between the two countries, especially in security, trade, energy, infrastructure, and higher education sectors and pledged to work assiduously towards concretizing actions agreed under the “Roadmap” signed by the two Ministers of Foreign Affairs in 2018. They also reviewed matters of regional and global interest and agreed to continue the close coordination of the two countries in international institutions.

During his meeting with Mr. Aouissi, the Permanent Secretary hailed the giant strides made by Algerian state-owned oil and gas companies, Sonatrach and Sonelgaz, and called for cooperation and knowledge sharing with their Nigerian counterparts, for effective manpower and gas infrastructure development.

The Permanent Secretary was accompanied to the meetings by the Ambassador of Nigeria to Algeria, H.E. Mr. Mohammed Mabdul and some other officials.