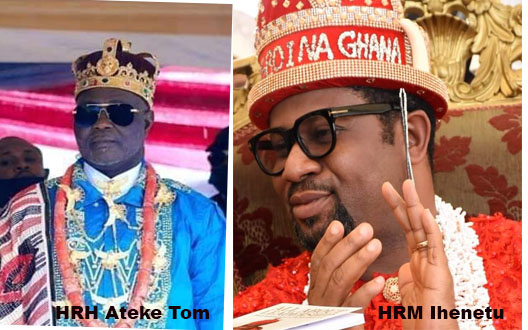 The Okirika community and entire River State roar to life at the weekend as people from all walks of live thronged the multi million Naira palace of the Royal father to pay him homage. Among the dignitaries is the governor of Rivers state, His Excellency Chief Barr. Nyesom Ezenwo Wike, CON, alongside the retinue of his colorful entourage.

In a statement, HRM Dr.  Ihenetu, a Peace Ambassador, described the occasion as blessings for Ikwere and Rivers people. The royal father commended Ateke Tom for promoting peace in the region. He urges him to continue in his stride to be father and promoter of peace in his kingdom.

While describing Ikwerre and Ndigbo people as cousins, HRM said the two tribes shares everything in common.

HRM Ihenetu also commended Governor Wike’s development stride in Rivers, which has earned him goodwill among his people.

The Royal Father also congratulates His Excellency Dr. Wike on his conferment as Se -Taribo of Okochiri Kingdom by His Royal Majesty, King Michale Ateke Tom- the Amanyanabo of Okochiri Ancient Kingdom.

HRM Dr Ihenetu whose acts of philanthropy and peace advocacy in Ghana and Nigeria have earned him numerous awards wishes the people of Rivers well.