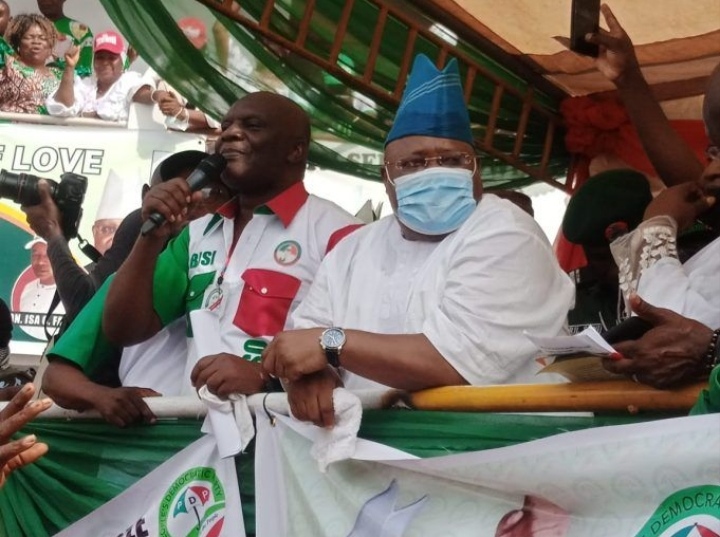 Hon Gbenga Ajayi has described Senator Nurudeen Ademola Adeleke as a man of rare courage following his roles and contributions towards the advancement and progress of PDP in Osun state and Nigeria at larger.

Honourable Gbenga Ajayi, the national President Osun Youth For Good Governance & Democracy  in a press release issued by himself on 26th November, 2021.

The proactive youth leader noted that in spite of the vicious political manipulation which robbed Adeleke of the Governorship position he vied for in 2018 and the several harassments against him, the former Senator deemed it fit to use the period after the election in a very productive and rewarding manner.

Also ensuring for his advancement and improvement. More especially PDP’s sustainance and progress even while he was away from  the country.

Hon Gbenga noted that while others in similar positions may resort to whining in bitterness or even creating mischief to protest the controversial decisions of the courts after the 2018 elections, Senator Adeleke stayed focused on personal self-development and positive engagements as a true democrat by building and sustaining Peoples Democratic Party in Osun therefore  ” No Senator Nurudeen Ademola Adeleke, No PDP in Osun State”

“The youth leader said that the true PDP faithfuls are proud of achievements, works and antecedents of Senator Adeleke.

“With Senator Nurudeen Ademola Adeleke as the elected and executive governor of Osun state will be bring Social, Economic and Political spheres. He is best positioned to drive the process of growth in our state and Nigeria as a whole

The Osun Youth For Good Governance and Democracy President use this medium to warm those who feel they can subdue PDP with force of violence to desist forthwith. Such vain effort cannot get any fruitful results because no amount of intimidation or sponsored violence that can discouraged Osun Youth from supporting and ensuring that Senator Ademola Adeleke wins Osun 2022 Governorship election.

“Testing the will of our people through any form of violence of is an effort in futility but stretching it further will backfire. We will not warn you again”, he said.

Hon Ajayi maintains that the Osun Youths love the courage of Senator Nurudeen Ademola Adeleke and we appreciate his disposition as a man of peace.

We are covinced that you are a man on divine purpose. Your unflinching effort at reinvigorating the party even while in far away United States of America depicts you as vessel of love, who will spare nothing to emancipate the good people of Osun State”

The Osun Youth For Good Governance and Democracy implored all the PDP members to work in unity, adding that, the party is one, and must be one for the betterment of the good people of the state.