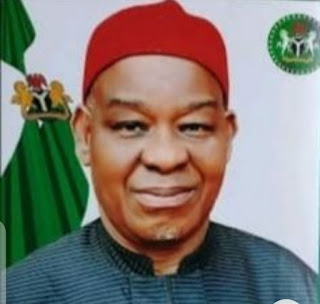 The Chairman of the All Progressive Congress (APC) in Ebonyi state, Alhaji Dr.Haroun Ogbonnia Ajah FIPMA, SFIARSA has commended president Muhammadu Buhari and the National leadership of APC for giving the nod for the CECPC of the party to conduct the national convention in February, 2022.

In a press statement signed by himself, Alh Dr Haroun Ogbonnia Ajah, APC State Chairman Ebonyi and released to the journalists on 24th November, 2021

According to Alhaji Dr Ajah, he said the conduct of the national convention of our great party-APC is a strategic dynamic decision that will fix and put the party in proper shape to come out victorious in the 2023 general elections.

We are elated and full of jubilation for this master stroke in the APC continued development and repositioning strides and endeavours.

Therefore,the national leadership of the party should ensure that the party is united in all the states of the federation before conducting the national convention by February 2022 in line with the party stakeholders collective interests.

He maintained that factions remain adamant in states like; Abia, Anambra, Ebonyi, Akwa Ibom, , Ekiti, Osun, Ogun, Lagos, Zamfara, Rivers, Enugu, Kwara, Oyo, Kano and Imo.We lost the 2019  governorship elections in Imo, Adamawa, Bauchi, Rivers , Oyo and Edo states due to internal crises in the various chapters of the party in such states.

Despite the recovery of Imo and Zamfara, the monumental loss of other states has continued to hurt  the party.The CECPC should emulate Gov. Akeredolu who united all factions and opposing chieftains of the  party leading to the victory of the party at the guber polls against all odds.

Foundation members of the party must never be sacrificed for decampees. The national reconcilation committee must live up to it’s expectations by ensuring a holistic resolution of the crises in various state chapters of the party.

Round table dialogue remains the most potent tool in resolving differences among members of the  party and not winners take all approach.The party must avoid having needless crises to prevent it from possible implosion.

APC Ebonyi State chapter strongly canversing support for His Excellency, Sen.George Akume’s bid for national chairmanship of great party-APC.
Sen as the most ideal candidate for this position.

Akume’s achievements as two tenured governor of Benue State, former Senator and current Minister of the Federal Republic of Nigeria are clear demonstration of his character, capacity and competence to become our  great party-APC National Chairman to further reposition  APC by the Special Grace of God.

As Ebonyi State chapter of APC pledges to support the ambition of His Excellency, Sen. Dr. George Akume to become the National Chairman of the APC. After a careful assesment of all the candidates contesting for this position, Ebonyi State APC singled out Sen Akume as the most qualified for the position.

Senator Akume is a grassroot politician who is very knowledgeable about party politics in Nigeria.

Dr. Akume became the Governor of Benue state as far back as 1999 and has remained politically relevant till date.Thus, Dr Akume is a fine wine which gets better with age.

One of the major problems of the APC since it took over power in 2015 is that there is a lack of effective reward for loyalty system in the party.

Dr Akume is a tested and trusted leader accomodated chieftains and major stakeholders of his party in his administration through appointments and empowerment when he governed Benue.

Dr Akume is a bridge builder who maintains good relationship with prominent politicians across the geopolitical zones of the country.He will therefore unify and stabilize the party if elected national chairman.

As a peacemaker Dr.Akume understands the need for consencus building and constructive engagement of critical stakeholders in resolving intra-party crises through round table dialogue.

As the National Chairman of the party, he will give all members equal oppurtunities to exercise their rights and above all return the party to winning ways come 2023.

Further more, Alhaji Dr. Haroun Ogbonnia Ajah, the APC Chairman, Ebonyi State expresses satisfaction for the valuable contributions to the beautiful growth and consolidation of the President Muhammadu Buhari’s legacies by our great party-APC for the purpose of taking us to greater victory in 2023.