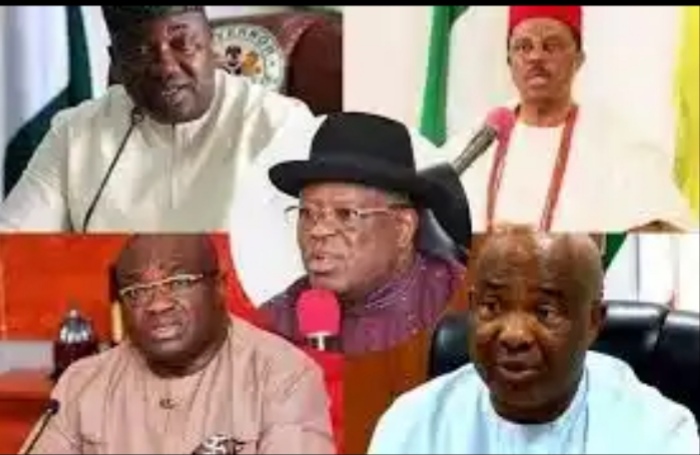 …. A Wake Up Call To South-East Governors ….

The security situations in the entire southeast has rattled everyone, due to the militarization of Alaigbo by federal government, causing incessant and wanton killings of our people, the Igbos. It’s almost reaching a crescendo. There is no gainsaying the fact that the governors of the Southeast have lost control of the people they supposedly govern, as the people have lost hope in them.

The masses prefer dancing to the tunes of those who sing their songs and blow their trumpets about their misery, agony, abandonment, enslavement, etc. These realities, they believe, the governors are uninterested and even worsen the situation. The governors only appear to face reality only when the adverse situation affects their interests.

The recent move by the Southeast governors to go and meet with President Buhari on the intractable security situation in Alaigbo, as a region is a welcome development no matter how late.

Despite the fact that the president is the Commander-in-Chief and the chief security officer of the nation, the governors have similar and relative capacities and positions, but limited constitutionally. Whatever they expect from Mr President, they can equally do. President Buhari, if he likes, can offer little or no assistance to the solutions to the problems in the Southeast.

The major onus of responsibility rests with the governors.
The southeast governors need to look within to contribute their own quota towards the solutions to the myriads of problems facing the region with respect to good governance.

Clearing from the roots, the summary of the problems of the region rest on good governance. If we run to the president today, definitely we will run to him tomorrow and this will lead to infinite regress.

It is high time the southeast governors put their acts together and put the development of the region as their priorities. The idea of a development plan has been eluding the Ndigbo.

A critical look and analyses of avenues to make southeast better will reveal a lot, only if the governors are sincere, committed and dedicated. We can extricate ourselves from the stranglehold of the centre where we are made to be beggarly, second class citizens and vanquished.

The major grouse spurring the IPOB agitation can be a starting point at introspection. If the centre marginalise us, must we equally marginalize ourselves? We need to ask ourselves, how are we marginalizing our people?

Do we give them good governance? Do we have any agenda to have the Southeast develop into an economic or political bloc? Going to the president is merely to go and address the symptoms and hypocritically ignore the main cause of the disease.

The Southeast governors should be inspired from the within if they want to give the people good governance. The southeast are business people, especially traders, seasoned entrepreneurs.

These should constitute an agenda for which they should go cap in hand and meet Mr President. Are they meeting Mr President because the people now obey the commands of IPOB and ignore theirs? Schools don’t hold on Mondays in the Southeast.

In Alaigbo today, no Governor can put any government function on a Monday and expect it to hold. Why? IPOB seems to be in command of the people.

If IPOB is influencing the masses because their objectives are in tandem with the beliefs of Ndigbo, the governors should glean from this and tap into the opportunity to make themselves endeared by the people once more by supporting the positive aspects of the quests of IPOB in the entire agitation.

This is not in illegal and violent approaches to issues. Those things IPOB is complaining about, how have the southeast governors addressed them? Is it open grazing? Is it marginalization in appointments?

How dedicated are they in the move by the entire southern governors to protect the interests of the entire south. Let the southeast not be the current saboteurs in Nigeria.

The southern governors can achieve a lot by forming a formidable bloc to deflate the inflated ego of the North that thinks it can always lord it over the south, especially the southeast. This is the most conscious and worrisome challenge and front burner in the agitation by IPOB.

The southeast governors need to sing with one voice irrespective of party affiliations and take into consideration the major grouse of the masses especially the youths. There are many development projects that can give the teeming youths employment and distract them positively from nefarious activities. The governors need to lobby for the masses not always for their own selfish gains and interests. 90 percent of containers in the Lagos ports are owned by the Igbo people.

Why is there no full flight operarional autonomy for the only International cargo airport upgraded by the former governor of Imo State, Sen. Rochas Okorocha, it is probably being ignored and downgraded because it’s located in Igboland or because it was built by Rochas Okorocha.

These are matters that should take our governors to Mr President. Going to Mr president under the guise of seeking the release of Nnamdi Kalu is laughable, is just to protect and revive their waning power and loss of control over the masses who are feeling marginalised from all fronts and angles.

Ohanaeze Ndigbo under my tutelage, and leadership had hitherto made several clarion calls and publications requesting Mr. President to release Mazi Nnamdi Kalu to us. It will quench agitations, and militarization of South East. Merely appealing with the agitators without addressing the major issues that spurred the agitation is hypocritical and selfdefeatist. It’s, one, a sign of lack of sincerity to the interest of the masses.

That can only be a temporary solution. Two, it means there is no intention to address the real problems. Intentions without any tangible evidence on ground remains a mere political gimmick. The governors should show some limelight on their sincerity to address the issues raised by putting certain measures on ground to convince the people.

Why are the people still sitting at home despite the fact that such has been called off by the initiators? This should be a question they need to ask and answer themselves.

We need to thank most sincerely our foremost and outstanding parliamentarian with irrevocable pedigree, former Hon Minster of the Fed Republic of Nigeria, our revered elder brother, leader, Chief Mbazuruike Amaechi for singularly visited President Buhari on behalf of Ndigbo, the visit for the release of Mazi Nnamdi Kalu, and also the Southeast Bishops and Traditional Rulers for joining us on our earlier demand to seek for the deproscrption of IPOB, their bold attempts and pragmatic steps to address the situation will grease the wheels of consciousness which will make the ground fertile for any meaningful dialogue.

We also pray for the safety of the conveners and signatories of the appeal to Mr President.

Let the southeast governors expend more time and energy towards lobbying for the economic good of the southeast, and realising the reasons why they were elected and entrusted these states on them.

The southeast is blessed with a plethora of human resources in the economic sectors who can identify the major bottlenecks on the economic development of the region. What policies are strangulating the region? These should be the basics that should push the southeast governors to run to Mr President, if we must tell ourselves the truth.