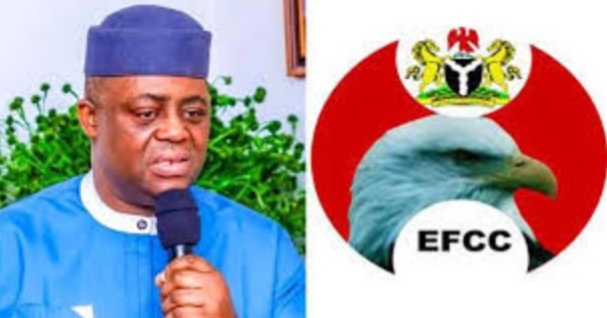 Former Minister of Aviation, Femi Fani-Kayode, has been arrested by the Economic and Financial Crimes Commission in Lagos.

Fani-Kayode was said to be under investigation for alleged forgery and manipulation of documents.

Our correspondent learnt that the ex-minister, who rejoined the All Progressives Congress in September, was brought to the Lagos Zonal Office of the anti-graft agency on Tuesday.

The details of the allegations against him were sketchy but the EFCC spokesman, Wilson Uwujaren, confirmed Fani-Kayode’s arrest by operatives.

“I think something like that happened,” he said and declined to comment further.Fani-Kayode had been having a running battle with the EFCC for some time and he was once remanded for 67 days in 2016 alongside a former minister of finance.

The details of the allegations against him were sketchy but the EFCC spokesman, Wilson Uwujaren, confirmed Fani-Kayode’s arrest by operatives.

Fani-Kayode had been having a running battle with the EFCC for some time and he was once remanded for 67 days in 2016 alongside a former minister of finance, Nevada Usman.

The Economic and Financial Crimes Commission (EFCC) is investigating a former Minister of Aviation, Femi Fani-Kayode, on a fresh development bordering on forgery before a Federal High Court, Lagos State.

The Lagos EFCC office is expecting Fani-Kayode on November 24, 2021, to answer questions on possible forgery of hospital documents to hoodwink the court handling the case against him on money-laundering allegations with a view to stalling hearing.

According to The ICIR, Fani-Kayode might well be deploying a contrived method between him and some medical personnel on the medical excuses to enable him to evade trial.

The EFCC, after receiving the defendant’s latest letter, observed the trend Fani-Kayode’s letters had taken in getting adjournments and decided to take a hard look at the development.
The agency observed all the letters were supposedly issued from the Kubwa General Hospital, Abuja, except one issued from the Federal Staff Hospital, Federal Ministry of Health, Abuja.

The letters were signed by different doctors, with the last one in October stating that the “patient (Fani-Kayode) has been diagnosed by one Dr. S. A. Tobechukwu” and signed by him.
The agency wrote to the Kubwa General Hospital on October 12, 2021 seeking authenticity of the letter. The hospital replied the next day, October 13, 2021, debunking Fani-Kayode’s claim and declaring there was no Doctor Tobechukwu in its employment and that, in fact, none of the names of the ‘doctors’ who purportedly issued the five letters existed in the hospital’s records.

The hospital also disclosed that no Femi Fani-Kayode had ever been diagnosed or treated as a patient at the hospital. The letterhead on the paper that Fani-Kayode used for his letters, the hospital stated, was fake and did not bear its reference number, just as the format of the patient’s number that he used did not tally with the format in the hospital’s database.
Consequent upon that finding, the EFCC wrote to Fani-Kayode on November 4, 2021, inviting him to report at its Lagos office on November 10, 2021, for a chat.
Fani-Kayode responded to the EFCC letter on November 9, 2021, stating he would be unable to honour the invitation because he would be appearing before an Abuja court on Tuesday, November 16, 2021, in a criminal case, and would need to prepare for the case with his lawyers.

He requested that the agency shift the date to November 17 or 18, 2021.
But he did not show up on the newly appointed day.
He, however, said he would honour the invitation on November 24, 2021, and should be allowed to appear at the Abuja office instead of the Lagos office of the EFCC.
But the agency promptly rejected his request to appear at the Abuja office rather than the Lagos office as the money laundering case against him that had elicited the invitation to him was being heard at a Federal High Court, Lagos, and not in Abuja.

The EFCC had on June 28, 2016, arraigned Fani-Kayode; Nenadi Usman, who was the Minister of State for Finance during the former president Goodluck Jonathan administration; Yusuf Danjuma, a former Chairman of the Association of Local Governments of Nigeria (ALGON), and a limited liability company, Jointrust Dimentions Nig. Ltd. before Justice
Muhammed Aikawa on a 17-count charge of the N4.6 billion money laundering trial.
The defendants were alleged to have committed the offences between January and March 2015, shortly before Jonathan left office in May 2015 following his defeat to President Muhammadu Buhari in the presidential election. Fani-Kayode, who was the Director of Media and Publicity in the Jonathan government and a member of the Peoples’ Democratic Party (PDP), defected to the ruling All Progressives Congress (APC) in September this year.