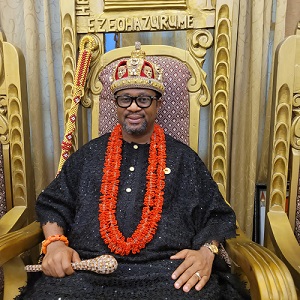 Moved by recent meetings of Igbo elders led by first Republic  Parliamentarian and Minister of Aviation, Chief Mbazulike Amechi with President Muhamadu Buhari on political solutions that could lead to  eventual release of IPOB leader, Mazi Nnamdi Kanu from detention, Eze Ndigbo Ghana and the Assistant Publicity Secretary Association of Ndieze Ndigbo in the Diaspora, HRM Dr Chukwudi Ihenetu has commended the elderstatemen on their fruitful deliberations.

In a statement, HRM Dr Ihenetu described the step taken by the Igbo leaders as refreshing. The Royal father appealed to President Buhari to write his name in gold  by listening to the voice of the elders.

Furthermore, Dr Ihenetu said it will be a great honour for the octogenarian Chief Amechi if his request and that of other Igbo eminent leaders  are granted as it will return peace and stability to the South East. “I thus appeal to  President Buhari to grant the request of this reverend men and release the IPOB leader.”

HRM Dr Ihenetu whose intervention  and that of other eminent Nigerians led to resolution of trade crisis between Nigerian traders and Ghana Trade union expressed happiness that at last dialogue was being employed to solve the problem.

The Royal father who is also Peace Ambassador expressed his readiness to contribute  to economic development of the region by attracting foreign investors  to the country.