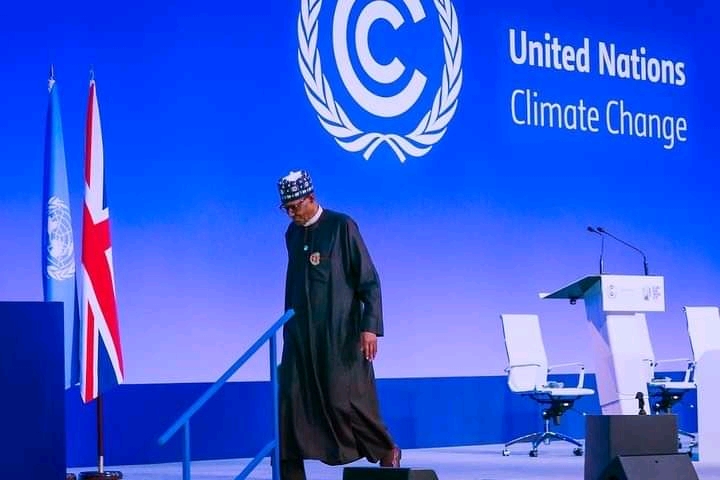 According to the UN, the event which started on October 31 is expected to end on November 12, 2021.

Seven days after President Muhammadu Buhari left Glasgow, Scotland for London, England to see his doctors, the Nigerian government has kept mute over the trip.

Buhari had on Sunday, October 31 travelled to Glasgow to participate in the 26th Conference of Parties (COP26) to the United Nations Framework Convention on Climate Change (UNFCCC).

Nigeria’s President Buhari leaving stage at United Nations climate change Conference #COP26 in Glasgow, Scotland.
According to the UN, the event which started on October 31 is expected to end on November 12, 2021.

“The President is scheduled to deliver his national statement at the High-Level segment for Heads of State and Government at the conference on Tuesday, November 2,” a statement by the Senior Special Assistant to the President (Media & Publicity), Garba Shehu had read.

Shehu had added that “In Glasgow, President Buhari will participate in some side-line events hosted by US President Joe Biden and French President Emmanuel Macron.

“It will have Heads of State and Government and CEOs of major multinationals, as well as several civil society actors, gathering to advance concrete solutions to the enormous challenges posed by the COVID-19 pandemic, and to improve global governance in times of COVID-19.”

Though Shehu’s statement said the President would travel to Paris after the summit, investigation shows that President Buhari after his speech last Tuesday at the COP26 Leaders’ Summit left Glasgow for London for a medical checkup and the Presidency has not deemed it fit to inform Nigerians about this.

At the time of filing this report, the presidential jet, now tagged Nigerian Air Force 1, had been in London for seven days.

Buhari took the Falcon 7X jet (5N-FGV) to Ethiopia and Saudi Arabia recently but flew the 5N-FGW Gulfstream Aerospace to Glasgow, Scotland, but it is currently sitting in London, awaiting when Buhari will be done with his doctors.

Therefore, since September 19, when Buhari departed Abuja for the UN General Assembly in the US and now, Buhari has used three private jets.

SaharaReporters had reported how the presidential jet (Boeing Business Jet (Boeing 737-700) 5N-FGT) developed a fault following Buhari’s recent trip to the UN General Assembly in the US.

Sources said the aircraft was subsequently moved to Euro Airport in Germany on September 29 and arrived at 4.15 pm after leaving the Nnamdi Azikiwe International Airport at 9.48 am, with the Nigerian government paying €5,000 (about N2.4 million) per night as parking fee.

To avoid any backlash, SaharaReporters gathered that the registration of the 5N-FGT aircraft was done using AMACGND.

Meanwhile, the President’s health has been a source of concern for many Nigerians.

Since he assumed office on May 29, 2015, Buhari has embarked on medical trips abroad many times, covering a period of no fewer than 170 days within the six years he has been in power.

The following is a timeline of the President’s trips for medical treatment; on February 5 to 10, 2016, the President took a six-day vacation in the United Kingdom, saying that his doctors lived in England.

Between June 6 and 19, 2016, Buhari went on a 10-day medical trip to England for an ear infection surgery. He extended his trip by three days to rest.

On January 19, 2017, the President was back in London again on a medical vacation.

On February 5, 2017, he wrote to the National Assembly, seeking an extension of his London medical leave. Later on March 10, 2017, Buhari returned to Nigeria but didn’t resume work immediately at Aso Villa.

The Presidency had claimed that “he was working from home.” On May 7, 2017, Buhari embarked on a trip to London for another medical vacation. He returned after 104 days – the longest he had stayed outside the country.

On August 19, 2017, Buhari returned to Nigeria, and it took him a while to resume work because rats had reportedly damaged furniture in his office.

The Presidency had announced that he would be working from home. On May 8, 2018, Buhari went to London for a four-day “medical review.”

In 2020, Buhari’s penchant for foreign medical treatment was affected by the COVID-19 pandemic and the attendant global lockdown and strain on medical facilities.

From March 30 to April 6, 2021, the President embarked on another trip for a routine medical check-up in London.

He was as well in the country in July 2021 for a ‘scheduled medical follow-up’ and conference.