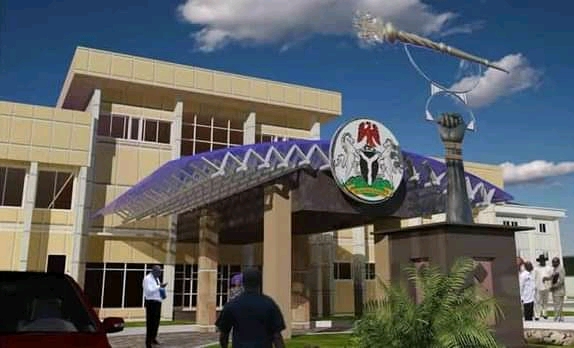 They replaced him with Kennedy Ibe.

The exercise was carried out amidst tight security with 19 of the 27 lawmakers said to have signed the impeachment papers.

It was learnt that the purportedly impeached Deputy Speaker, Amara Iwuanyanwu, stormed the Chambers with six lawmakers and some security personnel to impeach the Speaker.

The Speaker of the Imo State House of Assembly, Paul Emeziem was on Monday impeached following several allegations of gross misconduct and abuse of office.

According to sources, the former Speaker was, however, illegally Impeached.

Imo State House of Assembly
He was said to have been impeached following the decision of just 8 members out of the 27 lawmakers in the House.

Kennedy Ibeh who is the member representing Obowo State Constituency has been sworn in immediately as the Speaker of the Imo State House of Assembly.

Iwuanyanwu was on Tuesday, November 2, 2021, impeached by 18 out of the 27 lawmakers in the chambers.

Sources told Hotmedia.ng that Iwuanyanwu on Monday stormed the House alongside some security operatives to ensure the impeachment of the Speaker, Emeziem.

Sources said the Speaker heard about the planned removal and quickly drove to the House of Assembly but was denied access by the security operatives.

One of the sources said, “The Speaker has been impeached. The Impeached Deputy Speaker, Iwuanyanwu and some security operatives stormed the House

“Only 8 lawmakers removed the Speaker in a House of 27 lawmakers. Iwuanyanwu is close to the governor and believed to have the governor’s backing. And that was why the security operatives were even with the deputy speaker, and stormed the House together with him.

“They removed the speaker with 8 lawmakers and put Kennedy Ibeh of Obowo state Constituency there.”

Emeziem was allegedly tear-gassed and beaten up by the security operatives on the order of Iwuanyanwu who is said to have the backing of the governor, Hope Uzodinma.

Hotmedia.ng gathered that the impeachment of the Deputy Speaker had been in the offing for a long time after reports of gross misconduct and insubordination levelled against him by some of his colleagues.

Sources said Iwuanyanwu, representing Nwangele State Constituency, was generally seen as bringing disrepute to the House because of his numerous pending cases with the Economic and Financial Crimes Commission.

“Also, he does pride himself as the de-facto Speaker,” one of the sources had told Hotmedia.ng

He was also accused of being high-handed and brash.

He was said to have used his closeness to Governor Uzodinma to obstruct other lawmakers from accessing executive council members and truncating the passage of populist bills.

Hotmedia.ng had earlier reported how Iwuanyanwu’s impeachment was preceded by the recall of six suspended lawmakers after about four months.

Their recall also had to with insinuations that the former Deputy Speaker made attempts to hijack their allowances and salaries while they were on suspension.

After his impeachment, there have been moves by Iwuanyanwu to return to his former position through the backdoor, sparking outrage in the state, the sources added.

Iwuanyanwu is said to be fighting hard, especially using his connections in the Imo State Government House, to restore his position.

Reacting to the controversial issue, a former media adviser to Ex-governor Rochas Okorocha, Sam Onuwemedo said, “Iwuanyanwu could only return as deputy speaker if any court of competent jurisdiction quashes the impeachment, or, 2/3 of the Assembly members re-electing him as Deputy Speaker.

“Again, since the impeachment followed the constitutional requirement of two-thirds of the members signing, the provision could also be used in giving him relief or, bringing him back.

“Two-thirds of members could also sign and come up with a motion, to vitiate or eclipse or submerge or upturn or reverse the impeachment. These are some of the processes, the man could come back as deputy speaker.

“Coming back as the Deputy Speaker of the House, without any of the aforementioned processes being followed, could be threatened with litigations or could give room for a plethora of court actions, even by non-members of the Assembly.”

Meanwhile, some lawmakers who spoke to Hotmedia.ng on condition of anonymity insisted that the removal of Iwuanyanwu followed due process, while vowing to resist any attempt to return the impeached Deputy Speaker through the backdoor.

One of the lawmakers said, “Amarachi stands impeached. Any attempt to foist him on us will be met with stiff resistance. If he feels aggrieved over his removal, he should approach the courts for a reprieve. But, as it is, I can tell you confidently that he won’t smell that position again because his removal is popular in the House, and also across party lines.”

“The decision to remove him is unilateral and cannot be reversed. Any attempt to get the governor to reinstall him will fail woefully. He should return to the House and stop distracting us from the legislative business we were elected to do.

“There is a resolution where 18 lawmakers agreed and signed to impeach him. It was raised as a point of order. What this means is that all legislative requirements to impeach him were strictly adhered to and cannot be faulted.

“But, if he feels he has a case, he should head to a competent court of law instead of trying to force his way back into the position,” Another lawmaker told Hotmedia.ng

A Government House source added that the embattled former Deputy Speaker had been a regular face in the seat of power in the last few days.

Iwuanyanwu is said to be putting pressure on the governor to arm-twist his colleagues to accept him back as the number two man in the House.

“One of the Governor’s closest aides and the former Deputy Speaker has continued to threaten and in some cases offer money to some of the 18 members of the House who signed the impeachment to rescind their signatures,” the source told Hotmedia.ng

“Despite the pressure, the governor is being careful not to disrupt the relative peace in the House by insisting on the reinstatement of Amarachi. One thing is clear, the lawmakers are hell-bent on sticking to their decision and this has put the governor in a dilemma.

“If you ask me, Amarachi should accept that he is no longer popular among his colleagues and he better accepts his fate and works towards repairing the damages he has done in the House. If push comes to shove, Hope will abandon him and move on.”

Before taking the action, the complex was barricaded by security men who barred Assembly staff, lawmakers and their aides from gaining access into the complex.

The session which lasted for less than 15 minutes ended after Ibeh and Iwuanyanwu assumed office as Speaker and Deputy Speaker of the house.