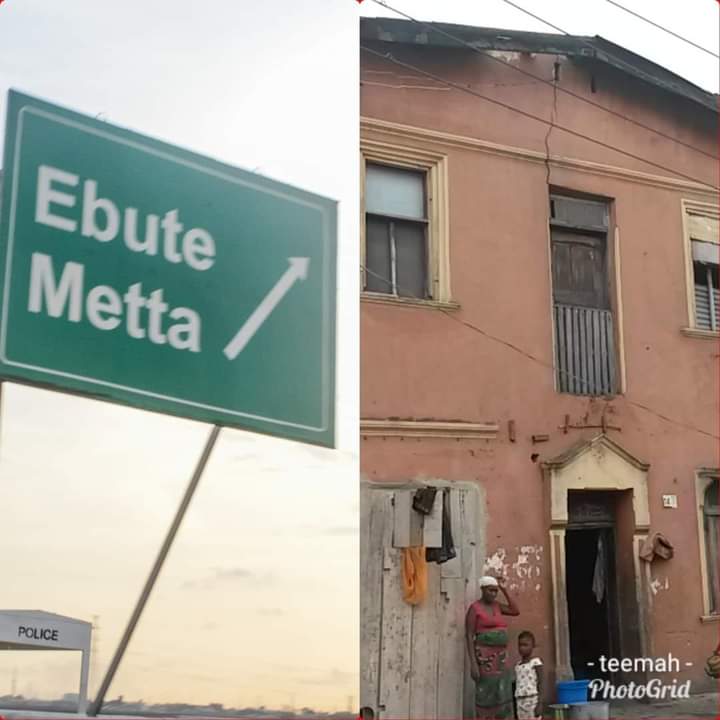 As someone who grew-up in Ebute-Metta and studied the History of the areas, these are my explanations;

1) Ebute-Metta was part of the “Awori Kingdom of Otto” with the Capital at Otto just before Iddo on the way to Lagos Island.

Ebute-Metta is a Yoruba meaning ‘The three Harbours’ i.e Iddo, Otto and Oyingbo.

In the olden days, the king, Oba Oloto of Otto controlled these harbour and had his agents collecting taxes from ships bringing goods to Lagos using those harbours.

2) Around 1850s, there was a great tension between the Christian community and adherents of Traditional Religion in Abeokuta which was on the verge of snowballing into a sectranian crisis.

On the eve of departure of some European Missionaries from Abeokuta, the native christian converts fearing that the dominant Traditionalists will descend on them in the absence of their European proctectors begged the Europeans to take them along to Lagos.

3) On getting to Lagos, the European Missionaries went to the King of Lagos to allocate land for the Egba Christians from Abeokuta but the king said Lagos was already being filled up and he couldn’t afford to give the little available land to the Egba people. Instead he suggested that the Colonial Governor, John Glover contact his brother Oba (The Oloto) on the other side of Lagos, just across the Lagoon.

4) Gov Glover approached the Oloto, who agreed to give the Egbas a large tract of land from Oyingbo (Coates Street) to Somewhere just before the lands of Yaba begins (Glover Street where LSDPC Estate was later built about 130years later).

4) These Egba Christians (some of whom were returnees from the infamous Trans-Atlantic slavery) formed a community which they called ‘Ago Egba’,Ebute-Metta.

They built their Church, St Jude’s Church with schools to educate their children and they divided the land into streets which were originally named after their European Missionaries & Colonial officers and some of the Egba chiefs like Daddy Osholake.

5) These Ebute-Metta people formed the first set of civil servants in Nigeria.

6) After the Amalgamation of 1914 and the construction of Railways, Ebute-Metta became a great destination for many people coming from the hinterland to Lagos, many of whom couldn’t get accommodation on the Island (reserved for only the Europeans and Upper class Nigerians).

7) The Ago-Egba peoples in Ebute constructed the Lisabi Hall which was commissioned in 1938, by which time their 3rd generation descendants have become the Engineers, Technicians and Civil Servants of the Nigerian Railways with Stations and offices near them.

cool By this time, Trains coming from the North bringing Cotton, Groundnuts, Beans, Hides &Skin, Local rice and of course people where very common in Ebute-Metta.
Interaction between the people of Ebute-Metta and these ‘Railway peoples’ became more cordial and intensed.

8) Some of the Streets were named after certain towns where the Trains stop for rest/evacuations of cargoes (Railway Stations) ,thus we have Kano, Jebba and Borno way.

Ondo, Ibadan, Abeokuta and Lagos Streets were named after the towns where some of the early residents originated form.

Willoughby, Glover and McCullumn streets were named after Colonial & Missionary masters which have not been changed.

Read Also : Busted: NNPC Executives Invite Newspaper Editors To Lagos Hotel, To Bribe Them To Discredit Report About Their Corruption

The naming and/re-naming of these streets were influenced by the Ago-Egba History, the roles of the colonial masters, the early Christian Missionaries and their interractions with the ‘Railway peoples’ and Railway Stations they passed through on their ways from the North to Lagos.

The Eastern Railways from Igboland terminated in Port-Harcourt where the British Colonial Masters were evacuating Nigerian resources (especially Coal) to Britain.

Perhaps if the Eastern Railways had passed through Ebute-Metta, they might had known about Aba, Enugu or Mbaise early enough and name some of their streets after these cities.