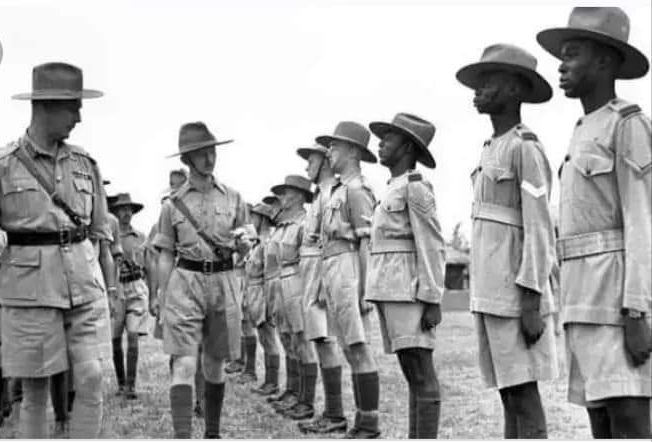 The history of the Nigerian Army dates back to 1863 when Lt. Glover of the Royal Navy selected 18 indigenes from the Northern part of what is now Nigeria and organized them into a local force, called the “Glover Hausas”.

The small army of locals was used by Glover during his rule as the governor of Lagos to carry out punitive expeditions in the Lagos hinterland and as well to protect British trade routes around Lagos.

In 1865, the “Glover Hausas” became a regular force and had their name changed to “Hausa Constabulary”. They performed both police and military duties for the colonial government. They later became ‘Lagos Constabulary.”

On incorporation into the West Africa Frontier Force (WAFF). In 1901, They became known as “Lagos Battalion.” In addition to the force, the British government included the Royal Niger Company (RNC), Constabulary Force in Northern Nigeria in 1886 and the oil rivers irregular in 1891.

In 1889, Lord Fredrick Lugard had formed the incipient body of what was to be known in 1890 as the West Africa Frontier Force, (WAFF), in Jebba, Northern Nigeria.

The new unit expanded by absorbing the Northern Nigeria-based elements of the Royal Niger Company (RNC) Constabulary. By the end of 1901, it had incorporated all paramilitary units in the other British dependencies into its command, thus fully meriting its designation “WAFF.”

The First commanders of the Southern Regiments of WAFF were Lt CHP Carter (1899-1901) and Col J Wilcox (1900-1909) respectively. The two regiments were later used for expeditions during the annexation of Nigeria by Lord Lugard between 1901 and 1903.

With the amalgamation of Nigeria in 1914, the unification of the northern and Southern Regiments came into being and this witnessed the birth of the Nigerian Regiments.

With the visit of Queen Elizabeth of Britain between 28 January and 15 February, 1956, the Nigerian regiment was renamed the Queens Own Nigerian Regiments (QONR).

Also in the same year, the regionalization of the WAFF came into existence and each military force became independent of the other. As a result, the QONR became the Nigerian Military Force (NMF).

By 1st June, 1958, the British Army Council in London relinquished control of NMF to the Nigerian Government.

In the same year, the Army changed its uniform, rank structure and instruments from those of RWAFF to new ones including green khaki uniform.