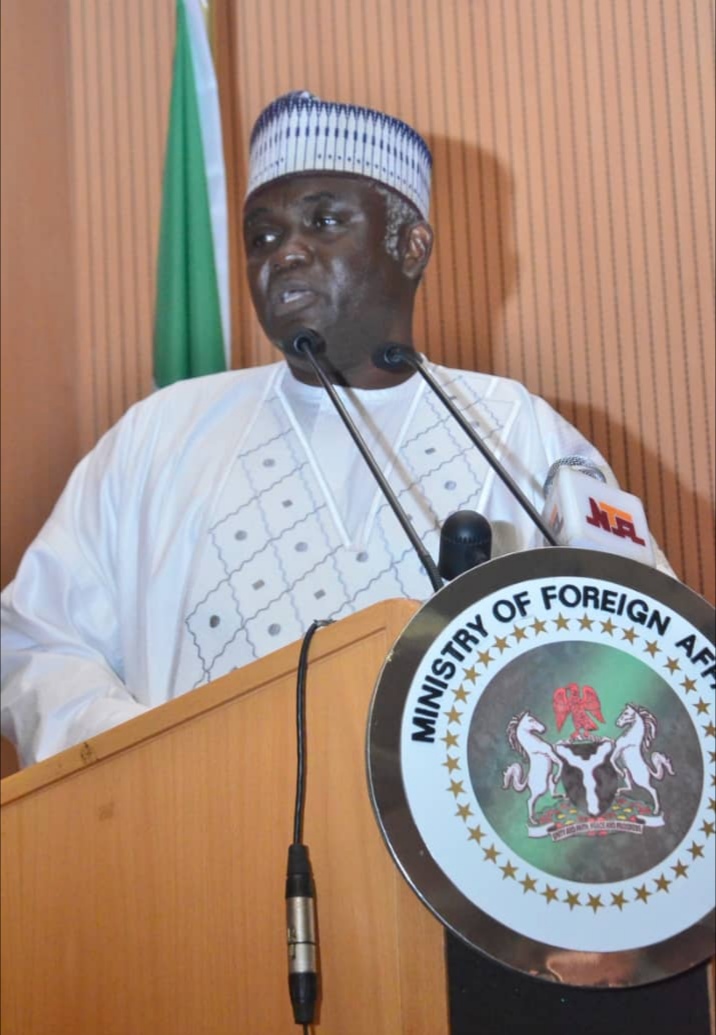 The house of Representatives committee on Foreign Affairs Commends Sundry Improvements at the Ministry Headquarters;

Pledges to Seek Increase on the Ministry’s Budgetary Allocation Seen to be Grossly Affected by Prevailing Dollar-Naira Exchange.

The House of Representatives Committee on Foreign Affairs today, Tuesday, November 2,2021, undertook an oversight visit to the Ministry of Foreign Affairs headquarters,Abuja. The members of the Committee,led by its Chairman,Rt. Hon. ( Dr.) Yusuf Buba Yakub,met with the heads and Management staff of the Ministry,which include: the Hon. Minister of State,Amb. Zubairu Dada; the Permanent Secretary,Amb. Gabriel Tanimu Aduda;the Director, Planning, Research and Statistics,Amb. Janet Olisa,other Directors and officers of the Directorate cadre as well as heads of Units in the Ministry.

In his opening remarks on the occasion of the visit, Chairman of the House Committee,Rt. Hon.Buba said the Committee was glad to,once again, return to the Ministry to carry out what he referred to as their Constitutionally- mandated role as lawmakers after their visit last year.He informed the leadership of the Ministry that,in solidarity with their fellow lawmaker,Sen. Philip Aduda and the Permanent Secretary of the Ministry,Amb. Gabriel Tanimu Aduda,whose father’ s burial obsequies were scheduled for Thursday this week,the Committee would merely take a tour of the Ministry and defer its question-and-answer session to Friday. A minute silence was observed in honour of the deceased.

Earlier while welcoming members of the House Committee to the Ministry headquarters,the Minister of State ,Amb. Zubairu Dada, observed the high act of patriotism that has been demonstrated by members of the Committee,who he said,have in many ways sought to improve the conditions of the Ministry by even undertaking self- sponsored visits to Missions across the world to acquint themselves with problems of our Missions worldwide. He also used the occasion to convey to the lawmakers the apologies of the Honourable Minister, Geoffrey Onyeama.He said the Honourable Minister had accompanied Mr President to the 26th Edition of the Climate Change Conference holding in Glasgow, Scotland,United Kingdom and was, therefore, unavoidably absent. He also added that the Honourable Minister was aware of the visit and would be properly briefed on his return to the country.

The Committee later undertook a tour of the Ministry headquarters,taking a close look at both the infrastructure and the state of equipment in place. While making observations before the press, members of the Committee, through its Chairman, were unanimous in their agreement that there was an over-all physical improvement in the operations and facilities of the Ministry this year. They commended the efforts of the Ministry’ s leadership and Management for the subtle,but eloquent statement the entire complex was making through its present looks. Buba re-iterated the Committee’s call for adequate funding for the Ministry,while also stressing that available facts have revealed that,in spite of the revenue the Ministry continues to generate,the Ministry may as well be running on a zero budget due to the rising Naira- Dollar exchange rate differential.