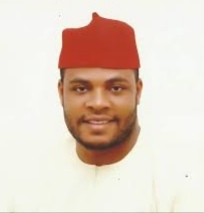 The whereabout of Mr Ifeanyi Nwaudunna the president general of the Igbo Youth social-cultural organization – Igbo Youth Assembly Worldwide is unknown since early hours of monday 1st of November.

He left Abuja on sunday 31st October to Awka Anambra State to address the members of Igbo Youth Assembly Worldwide Anambra chapter to support and vote for APC candidate, Senator Andy Uba in the November 6 Gubernatorial election of the State.

Ifeanyi Nwaudunna was expected to speak to the members of Igbo youth Assembly on monday 1st November. But since the same monday morning till now, he has not reached the venue of the rally, his phone line has been switched off and can not be reached.

The Igbo Youths Assembly Anambra chapter who were expecting to receive their leader, has thrown into worries and fear of the whereabouts of their president General as they prepared to welcome him in Anambra State. Till now they have not seen or hear from him.

The young family he left in Abuja, have not heard from him since monday morning. Both the family and Igbo Youth Assembly has thrown into fears and grief about the whereabouts of their father, husband and the youth leader.

Mr Ifeanyi Nwaudunna who is the President general of Youth Assembly Worldwide is a Youth activist and a politician, an advocate of national unity and progressive Nigeria.

Nwaudunna has been prominent and well known for his firm belief and support for the unity and peace of Nigeria through his various programs and activities where he has openly and unequivocally condemned the activities of IPOB and consistently urge the successionists and the Biafra agitators to embrace peace and support one, united and progressive Nigeria.

The Igbo Youth Assembly Worldwide calls on the relevant government authorities and security agencies to swing into action to search for Mr Ifeanyi Nwaudunna whose whereabout is unknown since early hours of monday 1st November.