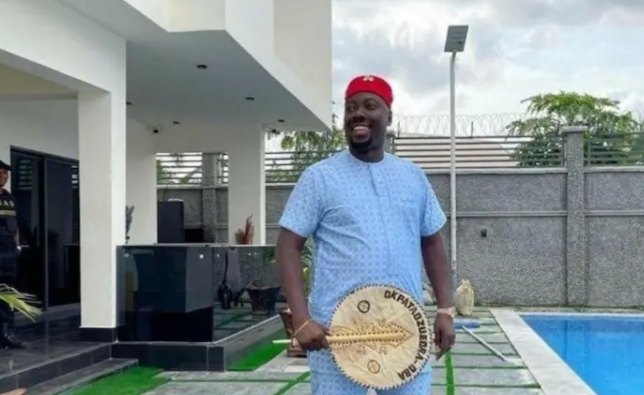 Obinna Iyiegbu, the socialite popularly known as Obi Cubana, is currently in custody of the Economic and Financial Crimes Commission (EFCC).

The businessman arrived at the headquarters of the commission at Jabi in Abuja at about noon on Monday, according to sources.

The source said detectives are currently interrogating Obi Cubana, who is likely to spend the night at the commission.

It is unclear the allegations against the socialite but the source said his case borders on alleged money laundering and tax fraud.

When contacted, spokesman of the Commission, Wilson Uwujaren, said he was yet to be briefed on the development.

Although Obi Cubana was a household name in social circles, he got more popular during the burial of his mother in July.

The burial, which held in Oba, a community in Anambra State, was the talk of town for a while.

The socialite and his friends threw a lavish party, displaying wad of dollars as if the foreign currency was going out of fashion.

His rag to riches story was an object of fascination to many while others questioned his sudden source of wealth.

In an interview he granted BBC Pidgin after his mother’s burial, Obi Cubana said he could not secure a job after he completed the National Youth Service Corps.

Iyiegbu graduated from the University of Nigeria, Nsukka in 1998, with a degree in Political Science.
“After undergoing my compulsory National Youth Service Corps (NYSC) programme in Abuja, I started searching for a job all to no avail.”

“That made me start some small jobs and from there I became a real estate agent. I usually get five percent of every task that is successfully executed. It was along the line that I and my colleagues met a man who asked us to help him furnish his house.
“We did it very well that he gave me N500,000 separately from the profit of N600,000 which I also made from the deal. That made it N1.1 million in total. It was after my NYSC that I made my first one million naira,” he said.

Read Also : FIRS To Institute TAX Compliance Measures On Operators In The Maritime And Aviation Industry-leading