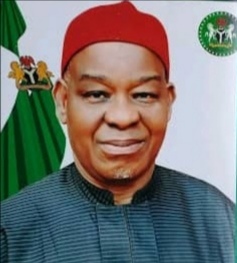 He was Born in 1956 at Ezi Egwu Village, Enohia Itim town in Afikpo, Ebonyi State.

Alhaji Dr. Haroun O. Ajah attended the former St. Peter’s Primary School, now Itim Ukwu and Islamic Centre both at Enohia Itim before the Nigeria-Biafra civil war in 1967. After the civil war, he proceeded insearch of further knowledge and education to the famous Arabic Institute of Nigeria,Elekwuro, Ibadan in Oyo State between 1974 and 1977.

Where he obtained his Intermediate and Grade II Certificates. Alhaji Dr.(Chief) H.O. Ajah traveled out of Nigeria to Saudi Arabia on an
International Scholarship to the popular Medina Islamic University between 1978 and 1984.

He returned back to the Nigeria for the compulsory one year National Youth Service Corps (NYSC) 1984/1985 in the Federal Government Girls College Owerri, Imo State.

Alhaji Dr. Ajah after the service year had a work stop over in the Muslim Council of Imo briefly under the Chairmanship of late Alhaji Dauda Onyeagocha and Secretaryship of late Alhaji Abubakar Osuikpa before he was appointed the Principal of Islamic Vocational College, Izombe near Oguta in Imo State from 1985 to 1988.

Alhaji Dr. Chief Haroun Ogbonnia Ajah served as  the Imo State Coordinator of the National Council of Muslim Youths Organizations of Nigeria (NACOMYO) and he later became the NACOMYO’s second National Vice President after a protracted struggle to reclaim
his mandate of annulled election for the position of the National President of NACOMYO.

On the creation of Abia State in 1991 Alhaji Dr.Ajah was appointed by His Excellency,Dr. Christopher
Ogbonnaya Onu’s Government, Director Abia Health Foods Limited under the Chairmanship of Dr. Gensha Amuta and was later appointed Member of the Abia
State Muslim Pilgrims Welfare Board.

He is also a Director of Al-Masjid Travel gency Limited and serves in the Council and
Mosque’s various committees.

He is the Director of AJAOBSONS AND COMPANY, Chairman,
HANDAZ International Limited Chairman DGB Publications Limited.

Alhaji Dr Haroun Ogbonnia Ajah held the position of the State Secretary of the powerful NIGERIAN SUPREME COUNCIL FOR ISLAMIC AFFAIRS (NSCIA) in Abia State which he thereafter became the Vice President-General for Ebonyi State up till date.

Hon. Alhaji Dr. (Chief) Haroun O, Ajah served as the Pioneer Chairman of the Ebonyi State Muslim Pilgrims Welfare Board and has contributed very immensely in the socio-political and economic developnent of Ebonyi State and Nigeria.

He donated his office and facilitates for the use of the Ebonyi State Creation Movement Abia State Chapter as a founding father.

Alhaji Dr.Ajah, the Nze Ndi Muslim of Igboland serves the Nigerian Muslim Community as the Vice President-General of the Nigerian Supreme Council for Islamic Affairs (NSCIA) and the Jama’atu Nasril Islarm (JNI) in Ebonyi State.

He is a member Board of Trustees Abuja National Mosque Trust Fund, he was appointed by former President Olusegun Obasanjo representing the South East Geopolitical zone under the chairmanship of His Eminence Alhaji Muhammad Sa’ad Abubakar, mni, CFR the Sultan of Sokoto and President-General, the Nigerian Supreme Council for Islamic Affairs (NSCIA) and Jama’atu Nasril Islam (JNI).

His a member of the Mosque Management Board under the Chairmanship of Etsu Nupe, Alhaji Yahya Abubakar.

Chief Alhaji Dr.H.O.Ajah, Ohaziri Mba,Ocho Udo and Nze Nna Nyeri Ugo I of Afikpo was a co-opted member of NSCIA Principal Officers, the highest policy making organ of the organization.

At the local community level, Alhaji Dr.Ajah was the President-General of Enohia ItimTown Union for almost two (2) decades. He has rendered so many services and executed many projects as well to his community arid beyond.

Alhaji Dr. (Chief) Haroun O. Ajah is a human rights activist, philanthropist, humanity
servant, a lover and cherisher of the Ndigbo nation interests and agenda in the Nigeria Project.

He was also a pronounced and hard working founding father of the Ebonyi State creation movement and donated his office and
facilities for the use of the Movement in Abia State.

He has contested elections to the Federal House of Representatives to bring genuine development and effective representation to the Afikpo North/South Federal Constituency in the defunct Democratic Party of
Nigeria DPN, All Peoples Party (APP) and in the People’s Democratic Party.

He has equally served as the Ebonyi State Secretary of the All Nigeria People’s Party (ANPP) in 2002/2003 and was a member in the PDP campaign committee in
Ebonyi State that delivered the Ebonyi State Executive Governor
Chief Martin Nwancho Elechi in 2007 as chaired by His Excellency Ambassador Lawrence Nwuruku, a former Minister and INEC National Commissioner.

He was the National Co-ordinator, South- East Alliance for Yar’ Adua/Jonathan presidency, 2007.

He was the National Leader, Solidarity Network of Nigeria and PDP Governorship Aspirant 2015, Ebonyi State.

He was National Commissioner
representing the Jama’atu Nasril Islam (JNI) in the National Hajj Commission of Nigeria (NAHCON) between 2008-2014.

He is a political strategist and management consultant of high repute.

He wants Nigeria to be good, and he has the potentials, capabilities and capacity to serve the nation at any level.

Alh. Dr. Haroun Ogbonnia Ajah is a recipient of so many other
awards, Community and Humanitarian Services.

An award, Philanthropism and Religions.

Award for his monunmental achievements through the ages, Community Peace Initiative Award by International Rotary Club of Port Harcourt – Nigeria 2014.

The latest being the WASU Kwame Nkrumah Leadership Award 2015 – Ghana.

He is happily married and blessed with many deserved and Successful children and grandchildren.