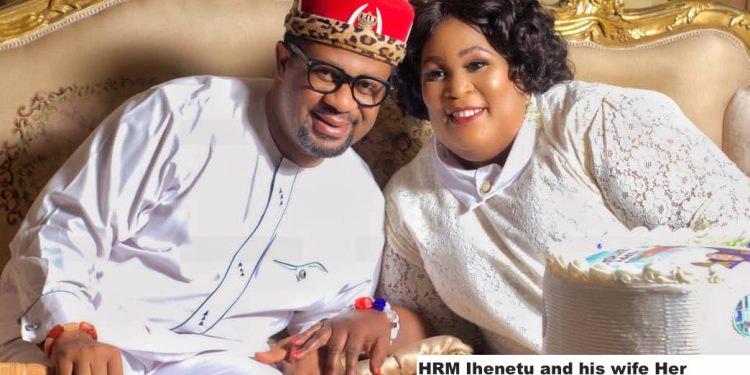 Earlier in the same week, HRM Ihenetu and his wife, Her Majesty, Ugoeze Liberty had celebrated their 23 years of marriage anniversary where the royal father and his queen hosted family, friends and well wishers to a royal banquet at the  Obi Eziokwu, palace.

In a statement, Her Majesty Ugoeze Ihenetu thanked Almighty God for adding another fruitful year to HRM Eze Dr. Ihenetu.

“On behalf of my family, my lovely children and Ndigbo in Ghana, I wish my husband, our father and the king, Happy Birthday. I pray that God will continue to guide you in all your steps as you continue to protect Ndigbo under your watch in Ghana.” she pray.

While thanking Almighty God for his mercies, which has made it possible for him to see another year, HRM Dr. Ihenetu said he will continue to cater for the needy through his philanthropic works as well as promote peace and unity among Ndigbo and their host country Ghana.

In words of appreciation made available to the media, HRM Ihenetu said: With sincere heart, I write to appreciate all my brothers and sisters, fellow kings, and Queens, government officials and members of Parliament, well wishers, all and sundries who celebrated me in a special way on my birthday.

I appreciate your gifts  bought with your hard earned money. I equally thanked all who backed me in their prayers, who made out their special times despite their tight schedule to wish me well on my birthday, I say a very big thank to you all.

“My prayers is that the Almighty God whom I serve relentlessly would celebrate you, grant you long life, open doors of wealth for you all and grant us heaven at the end of our earthly race in Jesus name, amen”

Speaking on his 23 years marriage anniversary, HRM Eze Dr Ihenetu also thanked God for giving him a supportive wife that has remained staunchly with him as they partnered together to put smiles on the face of Ndigbo and other Nigerians in Ghana.

Earlier, the Royal father released pictures of the earlier days of marriage to the applause of his friends and well-wishers.

On the secret behind over 2 decades of marriage, HRM Ihenetu attributed it to mutual love, understanding and the fear of God. He said these cardinal points served as road maps that enable him and his wife to live happily without rancor.

In his advice to intending couples, the royal father who has won several awards as a peace ambassador, urges them to imbibe fear of God and true love as yardsticks for going into marriage. He added that if God is present in the arrangements, the couple would go far in their marriage journey in life.

During the royal banquet, HRM Eze Dr. Ihenetu and his wife, Her Majesty Ugoeze took to de dance floor and regale people in attendance with royal dance steps. Other friend and family members also joined them on the dance floor to celebrate with them.