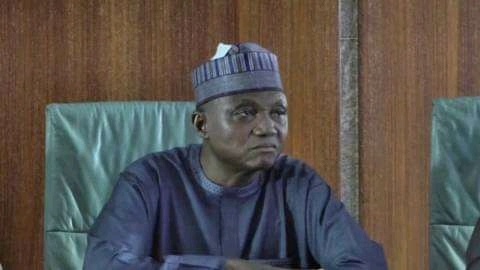 The Presidency says the trial of Nnamdi Kanu, leader of the Indigenous People of Biafra (IPOB), will lead to the end of the group.

Garba Shehu, presidential spokesman said this while responding to harsh criticism of President Muhammadu Buhari by a London-based news magazine, The Economist.

Presidential spokesperson, Garba Shehu.
In the article which was published on Saturday, The Economist criticised the Nigerian government’s approach to insecurity, saying “when violence erupts, the government does nothing or cracks heads almost indiscriminately”.

The article had also criticised security agencies, and in its recommendations, said “to stop the slide towards lawlessness, Nigeria’s government should make its own forces obey the law”.

Reacting in a statement on Sunday, Shehu said the arrest and present trial of the terrorist leader of IPOB, which he stressed the Economist rightly describes as “delusional” was the beginning of its demise.

He said the President’s administration was redoubling efforts to have IPOB rightfully designated as a terrorist group by its allies outside of Nigeria.

Shehu said it is an act that will collapse their ability to transact gains from crime and extortion in foreign currencies.

“It is important to remind the Economist and the global media that this group’s aggression and widespread presence on social media does not reflect their public support, for which they have none: all elected governors, all elected politicians and all elected state assemblies in the South-East – which IPOB claim to be part of their fantasy kingdom – reject them completely,” he said.

On banditry, the presidential spokesman added that the attacks involving bandits have been “simmering for generations”, but “it is the newest of the organised threats Nigeria faces to her stability”.

While faulting the description of banditry attacks in the article, Shehu said criminals who have resources to shoot down military aircraft shouldn’t be referred to as “bandits”, but as “highly organised crime syndicates with huge resources and weaponry”.

He, however, added that while such organised syndicates are not different from insurgents, the current administration remains committed to addressing the situation.