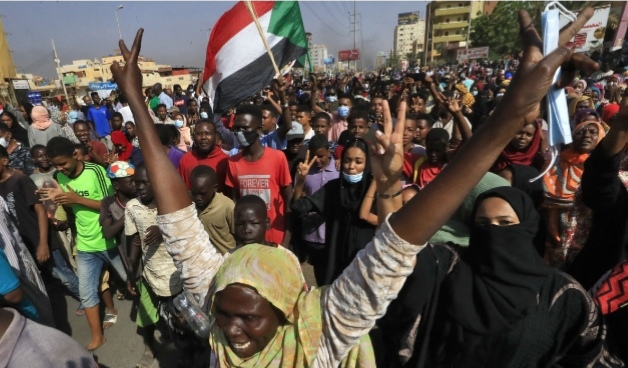 The Sudanese military has dissolved civilian rule and declared state of emergency in the country.

The military also arrested political leaders in the country.

This is coming at the heels of the intense protests that hit the Sudan Capital, Khartoum.

Thousands of civilians joined the protests amid reports of gunfire.

The overthrow of the former president, Omar Al-Bashir two years ago and the formation of a transitional rule has led to a divide between the military and civilian rulers in the country.

Sudan’s military leader has declared a state of emergency across the country while dissolving its transitional cabinet and the sovereign council in a huge blow to the country’s already fragile transition towards democracy.

Abdel-Fattah al-Burhan made a televised announcement on Monday as thousands of pro-democracy protesters flooded the streets of the capital Khartoum, and its twin city of Omdurman, after soldiers arrested several government officials.

Among those detained on Monday is Prime Minister Abdalla Hamdok. He was moved to an undisclosed location after refusing to issue a statement in support of the coup, said the information ministry, still apparently under the control of Hamdok’s supporters.

The military also raided the television and radio headquarters and shut down the internet. The capital’s airport has been also closed, together with some of the city’s roads and bridges.

At least 12 people have been wounded so far in the protests that have been called by the pro-democracy coalition born out of the uprising which put an end to the 30-year long rule of Omar al-Bashir.

In his announcement, Burhan said that the military will continue the process towards democracy, but dissolved the sovereign council, a joint military and civilian body created to run the country since al-Bashir’s removal.

“We have started our path towards the state of freedom and peace but some political powers are still trying to maintain everything in their hands, without giving attention to political, economic and social threats,” he said.

Al-Burhan said the military will appoint a technocratic government to lead the country to elections, set for July 2023.

But he made clear the military will remain in charge.

“The Armed Forces will continue completing the democratic transition until the handover of the country’s leadership to a civilian, elected government,” al-Burhan said.

The move came just before the military was supposed to hand leadership of the country’s joint military-civilian administration to civilians next month.

The information ministry called his speech an “announcement of a seizure of power by military coup”.

Tensions have been rising for weeks between Sudan’s civilian and military leadership over Sudan’s course and the pace of the transition to democracy.