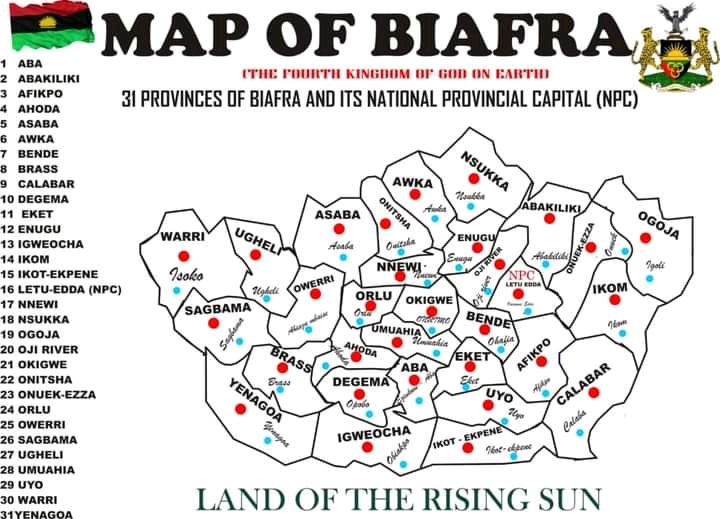 We the Biafran National Guard (BNG) wish to notify you of our preparations to re-hoist the Biafra flag of Independence, re-declare, re-establish and restore The State Of Biafra on October 30, 2021 and the formation of Government by the Biafran Supreme Military Council Of Administration (BSMCA).

Before now, we had mandated The Federal Government of Nigeria to release 19 Prisoners of Conscience Mrs Onyekachi Orji & Co held for over 15 years in detention facilities at Onitsha and Awka Prisons on October 20, 2021 and we also have the Government of Nigeria a deadline of October 21, 2021 to immediately and unconditionally release Mazi Nnamdi Kanu a Biafran-British Citizen kidnapped in Kenya and Extraordinarily Renditioned in Nigeria. The refusal of Federal Government of Nigeria to heed to our demands is a direct order for the re-hoisting of Biafra flag of Independence, re-declaration, and the formation of

We have written officially to 98 Countries of the world, all Embassies, Commissions and Foreign Missions in Nigeria. That the Biafran Provincial Government shall initially be run under military administration.

The Biafra Supreme Military Council Of Administration (BSMCA) shall assume and hold the helm of Affairs pending when absolute normalcy, peace, and love is restored to all the Provinces of Biafra Land.

In the absence of every rancour, acrimony, malice and grudges amongst all splinter groups and dissenting voices completely absorbed and peaceful understanding reached, power will be handed over immediately to a civilian duly elected Government.

We remind the world again and invite all and sundry to key into our forthcoming Live Broadcast by the Biafra National Guard (BNG) slated for 27th – 30th October, 2021.

The BSMCA hereby call for understanding from the United Nations and to get ready to welcome the birth of a New Nation on October 30, 2021.