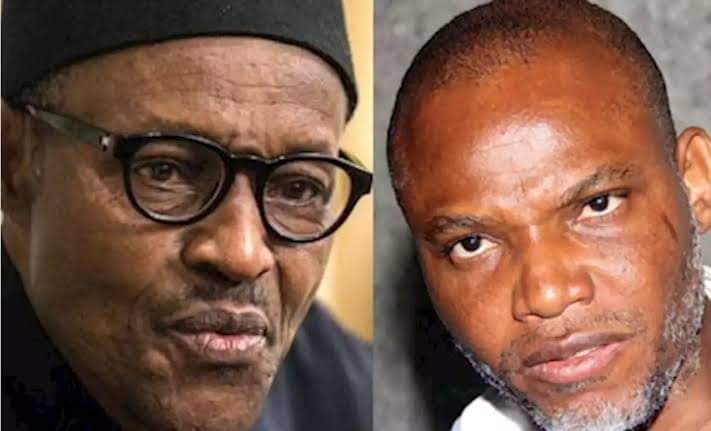 The Indigenous People of Biafra (IPOB) has denied being responsible for the killings in the south-east.

Recalls that on Friday, the federal government said IPOB attacked 164 police facilities and killed 175 security operatives in the region.

But reacting in a statement, IPOB accused the President Muhammadu Buhari’s government of media trial.

Read Also : Nnamdi Kanu’s Trial: The Sad State Of How Things Are Run In Nigeria – Okebata

“Why not wait for us at the law court instead of resorting to media trial. That shows he has no case to prove against IPOB,” Emma Powerful, the group’s spokesperson, said.

While denying the killings and destruction of properties in the south-east, IPOB said over 20,000 of its members are victims of extra-judicial killing by security operatives.

“To put the records straight, IPOB remains a peaceful movement, and was never involved in such barbarities Malami was linking IPOB with,” IPOB said.

“It is not controvertible that innocent IPOB members and Biafran youths have been wasted at different times by the Nigeria security agencies. This genocide against IPOB is still ongoing, yet they want to suddenly change the narrative.

“We have always said it that the unknown gunmen were a creation of the Nigeria security agencies to implicate and demonise IPOB. We have no hand in the killings in parts of Biafra land. The federal government which is sponsoring the killings is desperately looking for excuses to implicate IPOB and nail our leader Mazi Nnamdi KANU who they renditioned from Kenya. Our leader is innocent of all the concocted allegations and lies vomited by Malami against him.

“It is clear to all and sundry that IPOB was not involved in the EndSARS protests. Nigerian youths who were fed up with the evil in Nigeria vented their anger during the #EndSARS protests which took place simultaneously in different parts of the country.

“IPOB could not have been the ones behind the protest which was a spontaneous reaction of dissatisfied youths against the maladministration in the country.

“Malami should stop wasting his time and just fix a date for the Biafra referendum where our people can decide which country they want to stay. Failure to do so is to their peril.

“All destruction in our territory was politically motivated and carried out by security agents recruited and nicknamed unknown gunmen. We know the so-called unknown gunmen are DSS personnel, army and police personnel set up to implicate IPOB and ESN.”