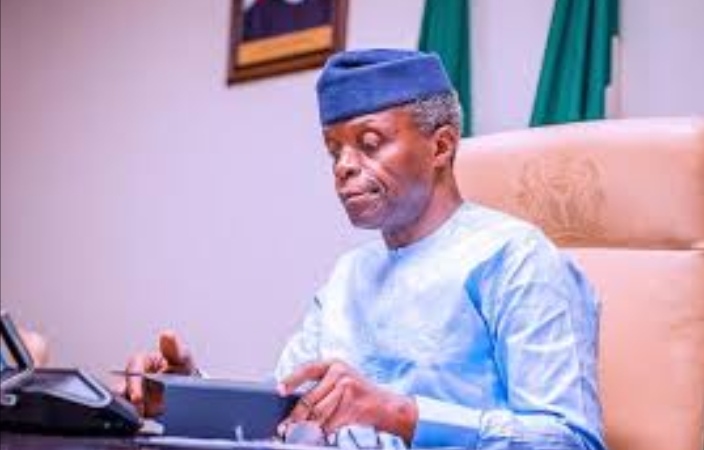 This hint was revealed by an aide to Yemi Osinbajo who said he over heard the Vice President telling close associates and members of the Redeemed Christian Church of God who paid him unofficial visit some days ago at the Presidential Villa.

The source also revealed that at Osinbajo’s visit to felicitate with Mr Bola Tinubu, the former Governor of Lagos and National Leader of the All Progressives Congress, APC, he sounded philosophical while eulogising Tinubu’s contribution to the political space and his influence on him.

According to him, “A lot of things would go wrong if anything had happened to you sir,” Osinbajo was quoted as saying to Tinubu, during that visit to Mr Tinubu’s country home at Bourdillon, Lagos State.

Although Mr Osinbajo has not declared publicly that he would vie for the topmost office in the land, his body language and the plethora of online media accounts promoting that ambition keep rising. He has also not denounced them.

Read Also : The Future of Nigeria’s Youth: The Promise Of A Kingsley Moghalu Presidency

Instead, many strategic groups promoting his candidacy keep emerging , describing him as best suited to take over from his boss after the expiration of their 8 years in office.

But a source revealed to The whistler over the weekend that in view of the political development in the South West, it would be a wrong calculation to state his interest publicly or keep people guessing.

This development, it was revealed, is due to the fact that Mr Tinubu has left no stone unturned to ensure he contests the presidential election.

Apart from the favourable shift of South West political movement towards Mr Tinubu, the divisive dimension in which supporters of both Tinubu and Osinbajo have been engaging themselves in the unofficial campaign was also cited as to the reason the Vice President must act fast.

It could be recalled Osinbajo was appointed Commissioner of Justice in Lagos State by Mr Tinubu while he was governor and has remained one of Tinubu’s confidants.

Mr Osinbajo, according to one of his close associates, has high regards personally and politically for Mr Tinubu.

In fact, it’s public knowledge that the liability of floating a Muslim/Muslim ticket in 2015 on the platform of the All Progressives Congress, APC, was what prompted Mr Tinubu to look in the direction of his closest protege as Mr Buhari’s running mate.

This was what made Osinbajo to emerge as the Vice President leading to his rapid rise in Nigeria’s political space.

The source said the Vice President would be eternally grateful for that gesture from his political godfather hence the need to preserve that goodwill and return it in 2023.

Besides, it would not only be disrespectful but amount to biting the finger that fed him hence his position that he would not contest the 2023 presidential election.

Already, there is a festering mistrust and growing attacks on both the Tinubu and Osinbajo camps.

This prompted Senator Babafemi Ojudu, Special Adviser on Political Matters to the President, Office of the Vice President, to say both Tinubu and Osinbajo cannot fight despite repeated attempts to pit the two politicians against each other.

The Vice President spoke vaguely about this development and was heard telling his guests how things were done in the South West – that the elders must be respected.

The source explained that the discussion also followed the formation of South West Agenda for Asiwaju, SWAGA, which was flagged off by Mr Babajide Sanwo-Olu, Lagos State Governor

In addition to this was the endorsement and registration of a partisan group called Nigeria in Diaspora for Asiwaju, NDA, by the APC.

In fact, some political watchers have been witnessing the increasing action around Mr Tinubu’s camp politically lately.

During one of those visits, a member of the House of Representatives from Niger State (APC), Hon Abubakar Suleja called Tinubu, ‘Mr President’.

Hon Suleja had said to Mr Tinubu, “Mr President, see you soon,” to which Mr Tinubu responded, “Thank You.”

Hon Suleja justified his position by saying, “We are praying for him to become President of Nigeria.”

While the Vice President denied visiting Tinubu in London, he posed for a widely circulated photograph when he visited Tinubu at his home in Lagos.

Although the Vice President was billed to attend both the launch of SWAGA and the welcome back party that was staged for Mr Tinubu, he was advised to shelve the idea and pay a solidarity visit as a private person.

Attempts to speak with the Vice President’s Media aide, Laolu Akandale, failed as repeated calls to his cell phone were paused. He also did not respond to a text message sent to his his cell phone.